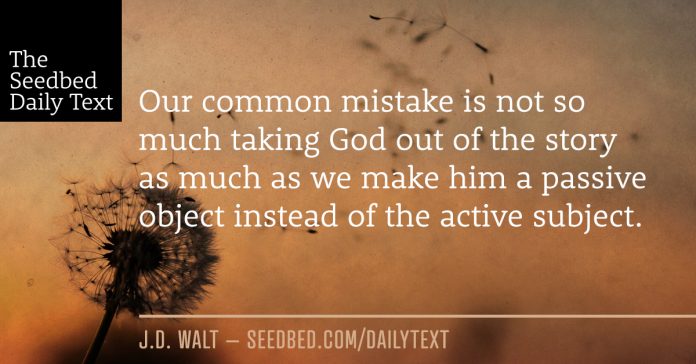 Then the high priest asked Stephen, “Are these charges true?”To this he replied: “Brothers and fathers, listen to me! The God of glory appeared to our father Abraham while he was still in Mesopotamia, before he lived in Harran. ‘Leave your country and your people,’ God said, ‘and go to the land I will show you.’“So he left the land of the Chaldeans and settled in Harran. After the death of his father, God sent him to this land where you are now living. He gave him no inheritance here, not even enough ground to set his foot on. But God promised him that he and his descendants after him would possess the land,even though at that time Abraham had no child. God spoke to him in this way: ‘For four hundred years your descendants will be strangers in a country not their own, and they will be enslaved and mistreated. But I will punish the nation they serve as slaves,’ God said, ‘and afterward they will come out of that country and worship me in this place.’ Then he gave Abraham the covenant of circumcision. And Abraham became the father of Isaac and circumcised him eight days after his birth.Later Isaac became the father of Jacob, and Jacob became the father of the twelve patriarchs.

“Are these charges true?”

Simple question, right? Yes or no answer? Not a chance.

Stephen does not defend himself. He does not blame someone else. He does not in any way seek his own vindication, nor does he play the victim. In fact, he does not reference himself at all.

Stephen answers the question with a story.

It’s worth making a few observations about how a biblical storyteller works.

Now watch this. If you want to see how a biblical storyteller works you must get down into the grammar. Who gets the verbs? God or Abraham?

By my count (and I’m counting from the English translation and not the Hebrew) God gets eight verbs across these first eight verses. Abraham gets one.

As for Abraham’s one verb: He left.

I cannot over emphasize the significance of this simple grammatical observation.

Storytelling is all about the verbs. Whoever gets the verbs . . . that’s who the story is about. The biblical story regularly includes people in dramatic fashion, but the story is always about God.

The next time you are in church, pay attention to who gets the verbs in the sermon. Even better, note who gets the verbs in the songs. Is God the central actor or are we, the people, the stars of the songs and prayers and sermons? And a word to my fellow songwriters: pay attention to the voice of the verbs. We give God way too many passive verbs these days (am, are, is, was, were). We don’t so much take God out of the story as we make him a passive object instead of the active subject.

The way we tell stories and the way we hear them shapes our memory and stirs our imagination. As you work your way through the Bible, pay attention. We will pick up where we left off with Stephen’s storytelling tomorrow.

What do you make of this “grammatical” insight? Does it make you want to become a more careful reader of Scripture? Verbs matter.