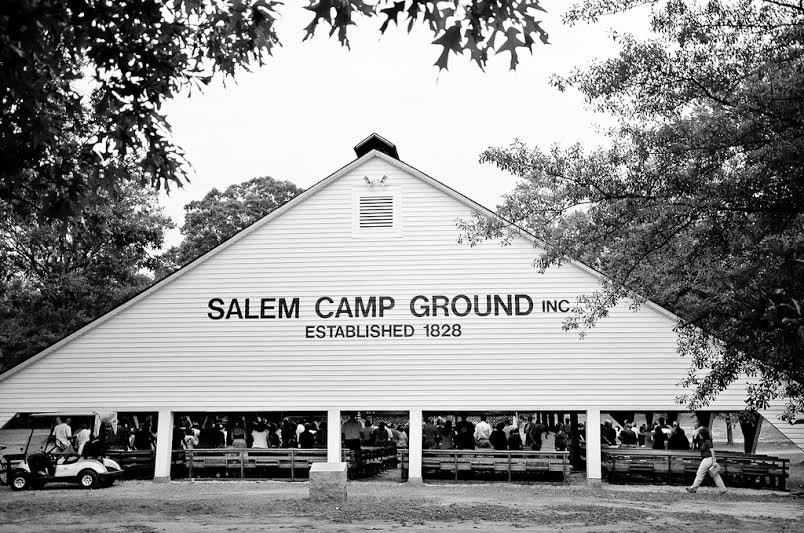 Each summer I do something odd by most American standards: I spend one week with my extended family, we sleep in a crowded cabin with no air conditioner, and we go to worship services three times per day—alongside of hundreds of others—in an open air structure with a sawdust floor. The songs we sing were written long before I was born and the sermons last much longer than fifteen to eighteen minutes.

Each summer I go to camp meeting.

Camp meetings are uniquely American institutions that were developed during the early years of the Second Great Awakening. At the time, they were a new method for evangelism and revival that sprang up all across the country. Camp meetings often provided a place for those who lived in unsettled areas to worship and gather as a community for a short period of time—typically during the late summer. They began with very temporary arrangements such as tents, wagons, and brush arbors to worship under. Over time, these gatherings established more permanent structures and began to draw people from all over the surrounding communities.

Francis Asbury once called camp meetings “a battle ax and weapon of war” that broke down walls of wickedness throughout America. He believed they were a great means of grace. And in 1811, he estimated that these spirit-filled gatherings brought together one-third of the total American population.

More than 200 years later, thousands of people continue to make the pilgrimage each summer to camp meetings that have withstood the test of time.

Here are five reasons why I think we still need them today:

1. They provide an opportunity for true Sabbath rest.

The first thing most people feel when they attend a camp meeting is that they have passed from busyness to tranquility in just a few small steps. Nestled away from billboards and rush hour traffic, part of the beauty of modern camp meetings is that most have literally been set apart from the world and inherited the simplicity of the times in which they were started.

You’ll rarely see a laptop, television, or gaming console. You’ll often see porch swings, laughter, and lounging. Many who attend take the week of camp meeting as vacation from work, and when no one else is worrying about being productive or efficient, you won’t feel the need to either.

The experience of camp meeting is difficult to describe, but Eugene Peterson’s description of Sabbath does a phenomenal job: “uncluttered time and space to distance ourselves from the frenzy of our own activities so we can see what God has been and is doing.”

2. They aid in the slow work of cultivating true community.

Today, the average worker stays in their job less than five years. The average homeowner sells their home in less than ten years. Sure, in five to ten years, great relationships can be built. But like cast iron skillets, the best relationships are formed slowly over time.

This summer will mark my 26th camp meeting. I’ve shared the crying years of infancy, the awkward years of middle school, and the growing years of being a young adult with an intergenerational community that hasn’t gone anywhere. Each year in this community babies are celebrated, deaths are mourned, people with cancer are cared for, and wayward children who once attended are lifted up in prayer.

Although I sleep in a cabin at camp meeting each night that holds three generations of my family, generations of others have helped them raise me and shape who I am. And they’re not all from the same church. As they were in the beginning, camp meetings continue to be a place where Methodists, Baptists, Presbyterians, and others truly come together for the gospel.

3. They are a foundation that helps with recalibration.

Questions like “who am I?,” “where am I headed?,” and “what’s the purpose of all of this?” aren’t anything new. Yet in a VUCA world—one that is volatile, uncertain, complex, and ambiguous—these questions are more challenging than ever and it’s easy to lose one’s bearings. Camp meetings are the antithesis of VUCA. Many of them are now 100+ years old and they exude steadiness, embody regular life-shaping rituals, and offer simplicity.

The altar calls, Sabbath time, and community that surround camp meetings provide just the kinds of opportunities through which one can easily explore the deep questions of life and experience the Holy Spirit move in a powerful way. They also come with the advantage that you can count on them every year.

J. Ellsworth Kalas once preached, “As marvelous as grace is when it invades our life, grace needs many continuing opportunities to invade our lives if we are to go on marching.” Camp meetings provide the time and place for this abundant grace to invade.

4. They serve as a reminder that we don’t have to make faith up as we go.

As Christians we’ve been called “to contend for the faith that was once and for all entrusted to the saints.” Yet as contemporary Americans, we often act as if we can make Christianity up as we go along.

Sitting under old brush arbors and tabernacles, walking with friends where others have walked for many years, sleeping in cabins that have been with families for generations, singing old gospel hymns, and listening to someone preach with the fervor of a second great awakening preacher each serve as a reminder that we’re part of something that started well before us. And the fact that camp meetings survive in our world today also serves as a testimony to the unstoppable nature of the gospel.

Countless institutions have closed down since the turn of the 20th century, but for some reason God has preserved camp meetings. I hope they don’t end anytime soon.

5. They form Christians in a deep way.

Camp meetings are a place where these three things happen in an intentional way for one week each year. Every day preaching, teaching, and conversation take place which help replace false narratives adopted from the world with the true narratives about God that Jesus regularly taught. Throughout the week, countless opportunities arise to spend time alone in prayer, care for broken and hurting people within the community, and encourage others with love. Every moment is spent with other people who have chosen to dedicate their lives to these same tasks.

The fruit of this formation is evident at many camp meetings. Simply visit and ask around, “How has God used camp meeting to shape your life?”

Better yet, leave a comment below about how God has used a camp meeting to shape your life so that you can serve as a testimony to others that God isn’t finished using this unique institution just yet.