Seven Steps to Praying like an Apostle - Seedbed
close
Menu 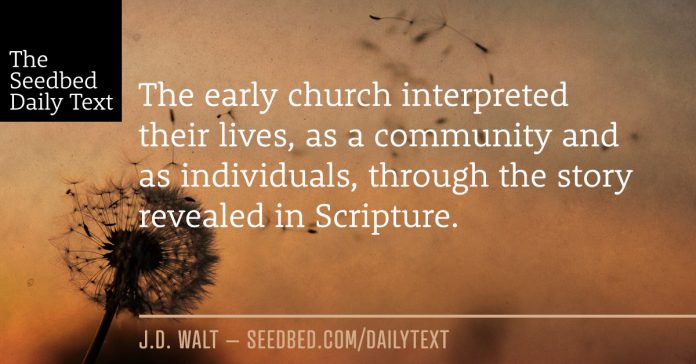 On their release, Peter and John went back to their own people and reported all that the chief priests and the elders had said to them. When they heard this, they raised their voices together in prayer to God. “Sovereign Lord,” they said, “you made the heavens and the earth and the sea, and everything in them. You spoke by the Holy Spirit through the mouth of your servant, our father David:“‘Why do the nations rage    and the peoples plot in vain?The kings of the earth rise up    and the rulers band togetheragainst the Lord    and against his anointed one.’Indeed Herod and Pontius Pilate met together with the Gentiles and the people of Israel in this city to conspire against your holy servant Jesus, whom you anointed. They did what your power and will had decided beforehand should happen. Now, Lord, consider their threats and enable your servants to speak your word with great boldness. Stretch out your hand to heal and perform signs and wonders through the name of your holy servant Jesus.”After they prayed, the place where they were meeting was shaken. And they were all filled with the Holy Spirit and spoke the word of God boldly.

I want you to notice a pattern emerging in this early band of believers. I have alluded to it before, but it bears repeating. They interpreted their lives, as a community and as individuals, through the story revealed in Scripture. They lived out of a memory much larger then their own life and times.

1. Their first instinct upon hearing the “bad news” about the restraining order from city hall (aka the Sanhedrin) was “Take it to God in prayer.” Sovereign Lord . . .  They didn’t rush out and start a petition drive to overturn the authorities. No, they appealed straight to ultimate sovereignty.

2. Next, they exercised what I call “macro-memory.” In Google Earth terms, they zoomed out until they could see the whole planet . . . you made the heavens and the earth and the sea, and everything in them.

3. After that, they began to zoom back in, still nowhere near the present situation though. You spoke by the Holy Spirit through the mouth of your servant, our father David. . .  They shifted seamlessly in their memory from the Book of Creation to the Book of Psalms. They prayed Psalm 2 (and for all we know they sung it).

4. Zoom in a few more clicks and fast forward a thousand years. Finally they get to about eight weeks earlier. Note how they deal with the so-called sovereignty of Herod and Pilate, the rulers of the land. They did what your power and will had decided beforehand should happen. It is a though they said, “These guys thought they were kings, but in the scope of God’s sovereignty they were mere pawns.”

5. Finally, we get to “the ask.” Now, Lord, consider their threats and enable your servants to speak your word with great boldness. The first century church did not make their appeal to city hall but to the High Court of Heaven. “Take that, restraining order!”

Permit me to take a swing at conventional wisdom concerning the relationship between what we can do and what God alone can do. There’s a saying in the church that goes something like this, “Work as though everything depended on you. Pray as though everything depended on God.” It’s just wrong. Yes, work hard, but get one thing clear: Whatever you do in the name of Jesus does not depend on you. It depends on Jesus. Just as there will be no signs and wonders apart from the Holy Spirit, neither will there be any “great boldness.”

7. Buckle your seat belts. Look what happened almost instantaneously: After they prayed, the place where they were meeting was shaken. There’s your sign. And they were all filled with the Holy Spirit and spoke the word of God boldly. There’s the boldness.

Wow! There’s an entire college course on prayer in these 8 verses of Scripture alone.

So give the seven steps a shot. 1. Start at the top. 2. Exercise macro-memory. Google-Earth your situation  3. Pray into and out of Scripture. 4. Remind yourself that this situation didn’t surprise God. 5. Make your ask simply and boldly. 6. Be ready to move into action and work, but remember it all depends on the Holy Spirit. 6. Invite divine intervention in the name of Jesus. 7. Be expectant. Buckle up! (If you are praying for rain, carry an umbrella.)

What strikes you about this way of praying modeled in today’s reading by the people of God? How does this challenge your usual way of praying?