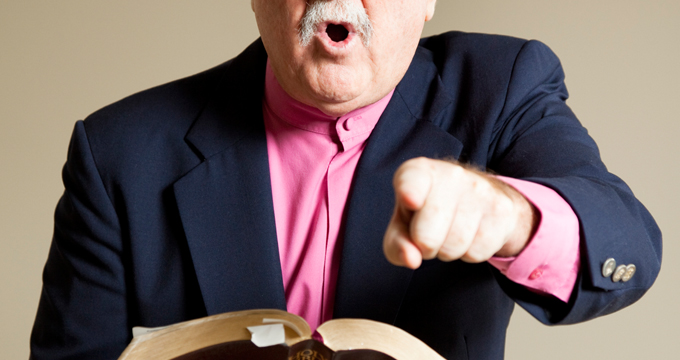 Some holiness people got off on the tangent of legalism. They came to identify holiness with “standards” and rules. In the most radical manifestations, the only way to be considered sanctified was to line up your life to their rulebook avoiding a lengthy list of “worldly” taboos. These rules were mostly unwritten, but all you had to do was look around to see what was expected of someone who was really sanctified.Many holiness people expected any serious Christian—and all sanctified folk—to line up with standards on hair length, hem-length, jewelry, makeup, and expectations about colorful or extravagant clothing.

The list also included a variety of forbidden activities like attending dances or the theater, or even going bowling because these things were considered “worldly.” Many of these standards were for women. While holiness males could dress pretty much like their coworkers, holiness women were expected to dress like their grandmothers. Among some holiness people it was commonly agreed that these standards were “the outward sign of the inward work.” You could tell who was really sanctified by how they dressed and what they didn’t do.

It’s true: God requires entire consecration—a willingness to submit to God in all areas of our lives. However, we should avoid setting up our own tests of submission. If a whole group does this in concert, they’re in danger of legalism. Legalism is not merely strict living—it’s trusting rules for holiness instead of the atonement—that’s why it’s so dangerous.

The trail of how this kind of holiness legalism develops is interesting. Whole denominations and movements can adopt certain taboos as outward signs of a holiness lifestyle. To show how such “standards” happen, we’ll use women’s hair as an example. There are few holiness people who still hold to this “hair standard” today, so it is easier to use here as an example. But you can substitute any of the more recent taboos and get the same results.

1. In the 1920’s a new style emerged in the secular culture: “bobbed hair,” cutting a woman’s hair short. The new style was promoted by Hollywood film stars and was quickly adopted by the “flappers,” a movement of young women who disdained conventional approaches to womanhood by shortening their skirts, wearing bold make-up, driving automobiles, smoking, dancing sexily, and insisting on their right to engage in casual sex. Christian woman and men were aghast. They rejected this “package” of values and likewise rejected some the social signs that came to represent them: make-up, dancing, short skirts, and bobbed hair (though not driving automobiles). If secular women would make these things symbols of their sexual liberation, holiness women decided to steer clear of these symbols. They didn’t want to be seen as a flapper and all that implied at the time.

2. Eventually some of these styles went mainstream and no longer meant what they had meant. Younger women came along who did not believe bobbed hair or make-up was advertising their sexual looseness, and they wanted to cut their hair and wear bold lipstick. Their mothers were aghast, still holding to the 1920’s meaning of these symbols. There were churches full of woman who had rejected the flapper lifestyle and symbols, not just holiness churches, but most other churches too.Yet younger women pushed for bobbed hair, because they no longer believed short hair meant what it originally meant.

3. Preachers got into the act on the mother’s side. First Corinthians 11:15 was often the basis of sermons on this issue. Since women were not to pray with their head uncovered (verse 5) and the hair was given for such a covering (verse 15), it was obvious to these preachers that bobbed hair was wrong for any woman who wanted to pray. Why cut off the glory God had given to a woman? Besides, the young women could just look around and see that every single woman in their church had long hair. Long hair became a test of being fully committed to following the clear teaching of the Bible.

4. Eventually a young woman (let’s call her Lois) came to say, “This is absurd. I’ll never let my hair grow out—not even to be entirely sanctified.” Ouch! In her statement, Lois came to set up her own test of total submission. Her hair length became (by her own making) more important to her than submission to the Bible. She wouldn’t submit to the hair length rule. So she continued to bob her hair. Yet Lois was bothered by something lacking in her Christian life. She knew deep inside that complete cleansing had not occurred. Why? Her heart was not right. She established hairlength as a “no trespassing” sign in her life. Her problem was not necessarily her hair but her attitude: she was refusing to submit.

5. Finally, Lois tired of her part-time victory and life of mediocrity. She surrendered to God, “You can have all of me. My will is in total submission to yours. Now (assuming this was her final holdout issue), God responded to the completely surrendered Lois.

History is full of illustrations where the next generation after legalism is often lost altogether from the kingdom of God. Or, almost as bad, the next generation will totally reject any and all corporate standards of behavior, as they will head off on the opposite tangent of “license,” preaching that anything goes when it comes to lifestyle and being like the world becomes a virtue!

He filled her with the Holy Spirit, and she was cleansed and empowered. Lois experienced new victory and power in her life. What she did next caused trouble for the other young women.

6. Lois testified to her new found power, “I refused to let my hair grow in obedience to God because that seemed like a silly rule to me. I said I’d never give in. But,when I finally did, the Lord filled me with his Holy Spirit, and ever since, my life has been totally different.”

7. Other young women in Lois’ church heard her testimony and, like Lois thought, “This is absurd. I’ll never let my hair grow out—not even to be entirely sanctified.” Now they too set up the same no trespassing sign, and they too made hair length their own test of submission. They may rebel and walk away from church (many did) or stay around, but as long as they enshrined hair length as their own test of submission it became for them the test.

8. Eventually, you can see how a whole church full of women would emerge who agreed that a godly woman doesn’t cut her hair. They together come to accept that a person can’t be entirely sanctified if they have bobbed hair. Whatever we set up as a test to God, it becomes for us a test. Wherever we refuse, God prods until we surrender. Not because God particularly cares that much about hair or lipstick (or most of the other more current “things”) but because God cares about our attitude of submission. In the time of the apostle Paul, the issue was eating meat purchased in the market that had been previously offered to idols. Paul declared that eating such meat was not wrong itself, however, those who believed it was wrong, thought so because for them it meant they were disobeying God (Rom. 14:23). Likewise,when everyone believed that short hairwaswrong it became wrong for those who believed it was wrong—because the wrong was in the attitude of rebellion, not in the thing itself.

9. The whole business calcifies into legalism when a people come to believe these outward test issues are the price and proof of the inward work. This is the way outward signs can gradually replace the real work of the Holy Spirit in legalism. When a group reaches this final step people begin to trust the rules for their holiness instead of trusting Christ. That’s why legalism is so dangerous. In its advanced stages, it replaces the blood of Christ with human rules and thus becomes heresy.

It’s true: God requires entire consecration—a willingness to submit to God in all areas of our lives. However, we should avoid setting up our own tests of submission. If a whole group does this in concert, they’re in danger of legalism. Legalism is not merely strict living—it’s trusting rules for holiness instead of the atonement— that is why it is so dangerous.

The greatest external consequence of legalism is how it hampers others from seeking holiness. These seekers stumble over false tests set up by “more mature Christians” (actually the apostle Paul considered them weaker Christians). Rather, we should place greater trust in the Holy Spirit to do his convicting work in the lives of believers. The Spirit will be faithful to point out to individuals their own particular areas of holdout.

But an even greater consequence of legalism may be the delayed results in the lives of the next generation. History is full of illustrations where the next generation after legalism is often lost altogether from the kingdom of God. Or, almost as bad, the next generation will totally reject any and all corporate standards of behavior, as they head off on the opposite tangent of “license,” preaching that anything goes when it comes to lifestyle and being like the world becomes a virtue! This tangent is just as dangerous as legalism. Today, more people get off on the license sidetrack than into legalism, but both are dangerous sidetracks.