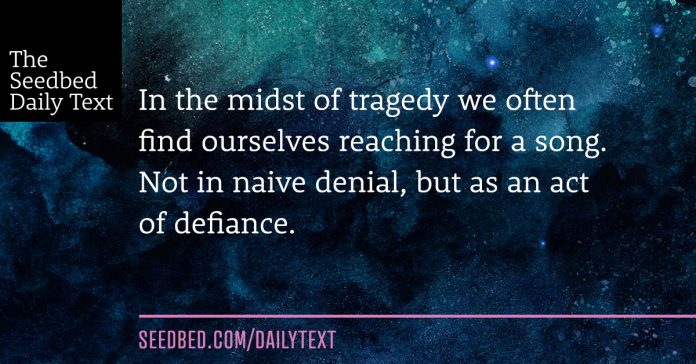 13 Suddenly a great company of the heavenly host appeared with the angel, praising God and saying,
14 “Glory to God in the highest heaven,
and on earth peace to those on whom his favor rests.”
15 When the angels had left them and gone into heaven, the shepherds said to one another, “Let’s go to Bethlehem and see this thing that has happened, which the Lord has told us about.”

I heard the bells on Christmas Day
Their old familiar carols play
And wild and sweet
The words repeat
Of peace on earth, goodwill to men

This classic Christmas carol was written by the renowned American poet Henry Wadsworth Longfellow. And as the lyrics suggest, he crafted it after hearing the local church bells ringing in the celebration of Christmas Day.

In the throes of the American Civil War.

Our nation was being torn apart and swallowed by turmoil. The violence and bloodshed were unthinkable. Too many fathers and sons were missing from the family table that day. Many never to return.

Longfellow’s own son was badly wounded while fighting for the Union, and his survival was still in question. Which is why he answers the first verse with another.

These words seem more like reality. And as they spoke to the turmoil and chaos of those days, they ring true in our time as well.

But Christians are strange people. In the midst of tragedy we often find ourselves reaching for a song. Not in naive denial. But as an act of defiance. A protest against the way things are. A prophetic and poetic vision of how they could be, should be, will be. Advent teaches us to sing in the dark. With the stubborn hope that the Light is on the way.

And that’s exactly why our poet friend writes yet another verse. We will give the last word to Mr. Longfellow and borrow his song for the season we find ourselves in.

Then pealed the bells more loud and deep
God is not dead, nor does He sleep
The wrong shall fail
The right prevail
With peace on earth, goodwill to men

God of Peace, prevail in the thick of our chaos. God of Light, teach us to sing in the dark.