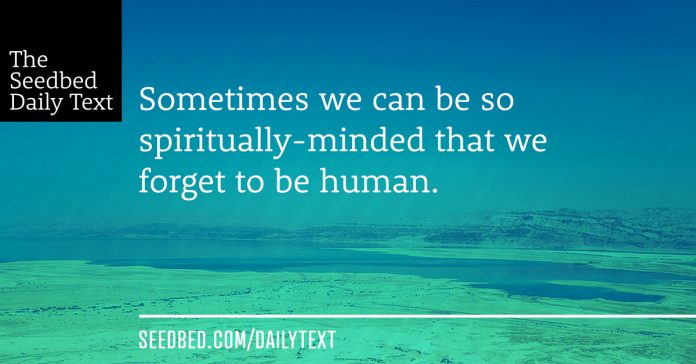 Now this was John’s testimony when the Jewish leaders in Jerusalem sent priests and Levites to ask him who he was. He did not fail to confess, but confessed freely, “I am not the Messiah.”

They asked him, “Then who are you? Are you Elijah?”

“Are you the Prophet?”

Finally they said, “Who are you? Give us an answer to take back to those who sent us. What do you say about yourself?”

John replied in the words of Isaiah the prophet, “I am the voice of one calling in the wilderness, ‘Make straight the way for the Lord.’”

Now the Pharisees who had been sent questioned him, “Why then do you baptize if you are not the Messiah, nor Elijah, nor the Prophet?”

“I baptize with water,” John replied, “but among you stands one you do not know. He is the one who comes after me, the straps of whose sandals I am not worthy to untie.”

A phenomenon was unfolding out in the countryside on the banks of the Jordan River. Word spread like wildfire. Droves of people gathered. God was up to something, and it was not happening in the temple.

The religious leaders, the ones we would expect to be the lead God-seekers, did not come. They sent their cronies. They wanted to find out not so much what was going on but who was behind it all. They wanted to know who John was. Where were his credentials? What were his qualifications? From where did he get his so-called authority? He gave them this:

“I am the voice of one calling in the wilderness, ‘Make straight the way for the Lord.’”

God stands among you and you do not recognize him because you do not know him. He stands among you in the midst of the crowd, unrecognized, hidden in the ordinary; in the frail frame of a human person. God is not in the temple. God is not some noumenal presence in the air creating a spiritual atmosphere in which people can experience him. No. God is somewhere in the crowd. He has a face. And he is wearing sandals.

Remember, God is a human being.

Almighty God, thank you for revealing yourself to us as Jesus of Nazareth. We think we grasp this until we really contemplate it. We can be so spiritually minded that we forget to be human. Help us with this. We pray in Jesus’ name, amen.

Did you know that the Daily Text Community is now praying together for a Great Awakening 24-7. Join the Watch for Awakening today. Choose a 30 minute slot. Download the Prayer Guide. And COME ON!