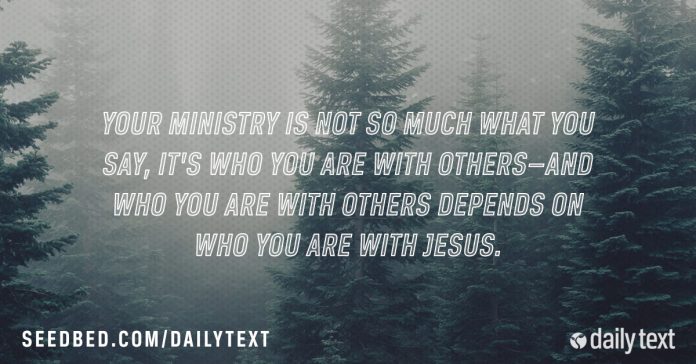 I am continuing my brief time away investing in my own heart, mind, body and soul. I treasure your prayers. My good friend, Omar Al-Rikabi, will continue to lead us through “Five Days With Philemon.” Omar pastors the First United Methodist Church in Heath, Texas, a suburb of Dallas. You will love him.

10 I appeal to you to show kindness to my child, Onesimus. I became his father in the faith while here in prison. 11 Onesimus hasn’t been of much use to you in the past, but now he is very useful to both of us. 12 I am sending him back to you, and with him comes my own heart.

13 I wanted to keep him here with me while I am in these chains for preaching the Good News, and he would have helped me on your behalf. 14 But I didn’t want to do anything without your consent. I wanted you to help because you were willing, not because you were forced.

The flattery and talking is done, and now it’s time to get down to Kingdom business. At the start of this letter Paul told his friend Philemon:

In other words, it’s time for a little less conversation and little more action.

And the action here is about dealing with a slave of Philemon’s named Onesimus.

We need to take a sidebar here and talk about slavery and Scripture. First, we must acknowledge that we have a dark chapter in our history regarding slavery, and often times certain Scriptures were used to perpetuate this sin, including some from Philemon. This was wrong.

Second, context is everything. We must remember that slavery in the Roman Empire was not the same as slavery in the Confederate South. Slaves were often given the chance to be educated; many were paid wages and could buy their freedom; many were given freedom at a certain age. But make no mistake, it was still slavery, which meant the lowest level of status for a human in the Empire.

So back to our story: It is into this reality that Paul the prisoner releases Onesimus the slave. We don’t know why he ran away, but it seems at some point Onesimus connected with Paul, became a believer, and had been helping him ever since.

Now Paul is sending him back. Under Roman law, this would have been really bad news for Onesimus. There were laws in place that allowed for severe punishment for returned slaves. So then why would Paul do this?

In other words, it’s time for a little less conversation, and a little more action.

Paul is about to ask Philemon to receive Onesimus differently than the culture or the law would: as someone sacred based on who they are in Christ. And remember, Paul addressed this letter not only to Philemon, but to the entire congregation. He’s asking all of them to do something unheard of… something radical… where the first are last and the last are first… where the way down is the way up.

Philemon is a believer, and how he receives Onesimus will reveal who he is with Jesus. In a great twist of poetic irony, these Scriptures that in the past have been used to justify slavery are actually Paul working to set the captives free. I believe that’s why Paul is doing this. And in the key setup, Paul says:

I once heard Billy Abraham say, “If you can’t say no, then your yes is meaningless.” It is only in the freedom and holy love of Jesus that Philemon – or any of us – can be willing to do something unheard of for the gospel. It’s time for a little less conversation, and a little more action…please.

Tomorrow we’ll see what it is. To be continued…

Heavenly Father, by the power of your Holy Spirit would you guid us along the path of truth, for your name’s sake. Through Jesus Christ our Lord, amen.

1. What does it mean for you to put into action the “generosity of your faith?”

2. What does it mean for you to be willing, verses forced, to do the will of the Father?