A Second Touch of God in Salvation - Seedbed
close
Menu 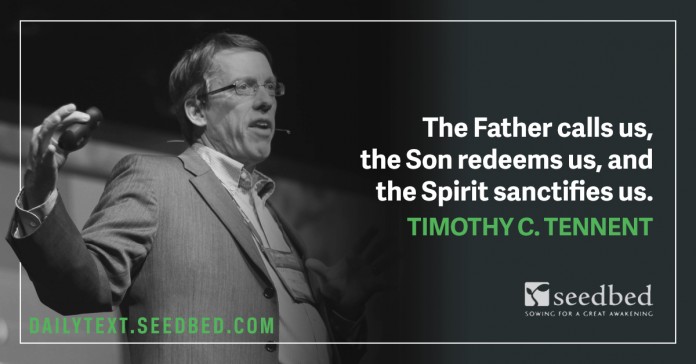 During those days another large crowd gathered. Since they had nothing to eat, Jesus called his disciples to him and said, “I have compassion for these people; they have already been with me three days and have nothing to eat. If I send them home hungry, they will collapse on the way, because some of them have come a long distance.”

His disciples answered, “But where in this remote place can anyone get enough bread to feed them?”
“How many loaves do you have?” Jesus asked.

He told the crowd to sit down on the ground. When he had taken the seven loaves and given thanks, he broke them and gave them to his disciples to distribute to the people, and they did so. They had a few small fish as well; he gave thanks for them also and told the disciples to distribute them. The people ate and were satisfied. Afterward the disciples picked up seven basketfuls of broken pieces that were left over. About four thousand were present. After he had sent them away, he got into the boat with his disciples and went to the region of Dalmanutha.

The Pharisees came and began to question Jesus. To test him, they asked him for a sign from heaven. He sighed deeply and said, “Why does this generation ask for a sign? Truly I tell you, no sign will be given to it.” Then he left them, got back into the boat and crossed to the other side.

The disciples had forgotten to bring bread, except for one loaf they had with them in the boat. “Be careful,” Jesus warned them. “Watch out for the yeast of the Pharisees and that of Herod.”

They discussed this with one another and said, “It is because we have no bread.”

Aware of their discussion, Jesus asked them: “Why are you talking about having no bread? Do you still not see or understand? Are your hearts hardened? Do you have eyes but fail to see, and ears but fail to hear? And don’t you remember? When I broke the five loaves for the five thousand, how many basketfuls of pieces did you pick up?”

“And when I broke the seven loaves for the four thousand, how many basketfuls of pieces did you pick up?”
They answered, “Seven.”

He said to them, “Do you still not understand?”

They came to Bethsaida, and some people brought a blind man and begged Jesus to touch him. He took the blind man by the hand and led him outside the village. When he had spit on the man’s eyes and put his hands on him, Jesus asked, “Do you see anything?”

He looked up and said, “I see people; they look like trees walking around.”

Once more Jesus put his hands on the man’s eyes. Then his eyes were opened, his sight was restored, and he saw everything clearly. Jesus sent him home, saying, “Don’t even go into the village.”

Our meditation on this Sunday is centered on a blind man who is brought to Jesus to be healed. Jesus, as we saw last week, takes him aside and puts spittle on his eyes. What happens is unusual. The man is not completely restored. It is a partial healing. Jesus touched him a second time, and he was completely healed. Why the second touch? There are several passages in this part of Mark where Jesus has to repeat himself—to multiply the loaves twice or touch the blind man twice. All of these texts are about re-teaching, re-touching, re-membering, and re-doing until we get it right. We all know that even Jesus didn’t just teach his disciples one time and they immediately “got it” like the wave of some spiritual hand or celestial magic. No, it was hard work.

You see, Jesus faced two challenges with this blind man. One challenge was his blindness; the other challenge was his lack of clarity. He saw, but people looked like trees walking around. This was exactly what Jesus was wrestling with in teaching his own disciples. Every commentator on Mark has pointed out how Mark weaves together the spiritual blindness of the disciples with the physical blindness of those Jesus encountered. There is an intentional teaching moment going on here. The disciples were spiritually blind and received their sight through the power of Jesus. But, they also lacked clarity and needed a second touch and sometimes a third and a fourth—until they got it right. Notice the similarity of language when Jesus said to his disciples in verse 17, “do you still not see” and the question to the man in verse 23: “do you see anything?” The disciples, like this man, were not just spiritually blind, they also couldn’t see clearly even after their spiritual sight was restored. Jesus was, if I can press the image, like a blurry messianic tree walking around—they couldn’t see him clearly. They, like the man, needed a second touch.

This is, of course, one of the great contributions of the Wesleyan movement to Christianity. This text does not explicitly teach the need for a second work of grace, but it sure does provide the theological space for it, doesn’t it? It is not enough to be justified in some grand moment of spiritual crisis. We need a second work of grace. We need the infilling, empowering, sanctifying work of the Holy Spirit! Our salvation is not a one-man act in Jesus Christ. It is a full, divine drama of the entire Trinity! The Father calls us; The Son redeems us; and the Spirit sanctifies us. Wesley loved the fact that the Reformation restored the centrality of Jesus Christ to the church. But, we also can never forget that the entire Triune God is working on our behalf. We need multiple works of grace in our lives. Praise God.

1. Do you sometimes feel like you are in a spiritual fog and need God to touch your life in a fresh way?
2. Have you ever experienced the infilling and empowerment of the Holy Spirit in your life?