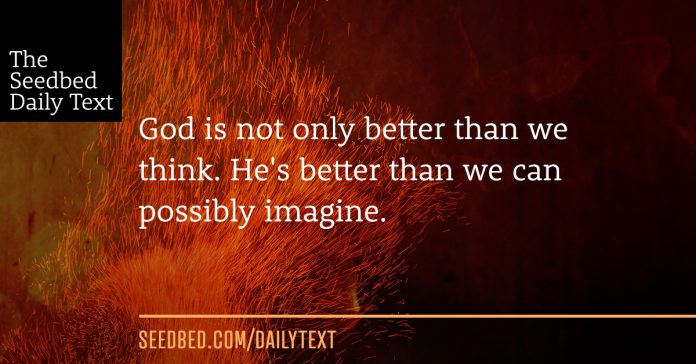 30 At once Jesus realized that power had gone out from him. He turned around in the crowd and asked, “Who touched my clothes?”

31 “You see the people crowding against you,” his disciples answered, “and yet you can ask, ‘Who touched me?’ ”

32 But Jesus kept looking around to see who had done it. 33 Then the woman, knowing what had happened to her, came and fell at his feet and, trembling with fear, told him the whole truth. 34 He said to her, “Daughter, your faith has healed you. Go in peace and be freed from your suffering.”

35 While Jesus was still speaking, some people came from the house of Jairus, the synagogue leader. “Your daughter is dead,” they said. “Why bother the teacher anymore?”

36 Overhearing what they said, Jesus told him, “Don’t be afraid; just believe.”

66. You may remember from yesterday this point about Jesus not seeing people as the sum of their problems but rather as the sons and daughters of the Father. Yesterday’s text provided us another great example. If I’m honest, I’ve always labeled this woman who had been bleeding for twelve years and who was trying to reach out and touch Jesus to be healed as just that, a sick woman who had suffered greatly and spent all her money on doctors who couldn’t heal her. I summed her up according to her problems.

She did in fact manage to find her way through the pressing crowd at which point she reached out and touched his clothes. Instantly, she was healed. Now here’s the fascinating part. How is it that Jesus could on the one hand know that power had gone out from him (a major phenomenon in itself) and on the other hand not know where the power went. His disciples went in the other direction, asking how on earth he could possibly know who touched him with all these people crowding around him. For my money, Jesus knew exactly who touched him. I mean, anyone who has the supernatural sensitivity to know that power had gone out from him knows where it went- right?!

67. This was a setup. But Jesus kept looking around to see who had done it. He was on an urgent mission to the home of a little girl who was at death’s door. Why did it matter so much to Jesus to know. Here’s my theory and I think the text bears it out.

68. I am convinced this was a set up to create this unprecedented opportunity for Jesus, the Son of God, to speak the Gospel to her in a single word: DAUGHTER. Of all the things she likely thought of  herself—like how she probably deserved this plague of a condition for something she had done somewhere in her past, or how ashamed her family must be of her for all these years, or how she might rather just disappear and die than be exposed publicly like this—she wasn’t likely thinking of herself as the beloved daughter of a loving father. DAUGHTER. There are a lot of women reading this who need to hear this word spoken into the depths of your being: DAUGHTER. You are the beloved daughter of a perfect Father who sees beyond the shame you may have suffered. You are the beloved daughter of a Divine Father who can hold you and speak into you and heal you from all the brokenness that may have been caused by your own broken earthly father. DAUGHTER.

He said to her, “Daughter, your faith has healed you. Go in peace and be freed from your suffering.”

Two days ago it was a “Son” being freed from his suffering. Today we behold freedom for a beloved “Daughter.” I think there’s also a word tucked in here for those of us who are Fathers, if we’re listening.

While Jesus was still speaking, some people came from the house of Jairus, the synagogue leader. “Your daughter is dead,” they said. “Why bother the teacher anymore?”

The worst four words a parent could hear: “Your daughter is dead.” Jesus counters with the five most hopeful words:

Most days, many of us have occasion and opportunity to speak these words to someone who needs to hear them. Commit those five words to memory and ask the Spirit to bring them to mind when needed.

Spirit of the Living God, fall afresh on me. Thank you, Jesus, for the miracles, but thank you even more for the deeper healing you do in us when you tell us who we most truly are—sons and daughters—beloved ones. I need that word to brand my heart. It is my freedom from every slavery. Melt me. Mold me. Fill me. Use me. For the glory of your name, Jesus. Amen.

Which is the deeper healing here—the healing of her sickness or the healing of her identity—and how might these two things have been related? See any parallels in your life and community today? In other words, how does your identity need deep healing?