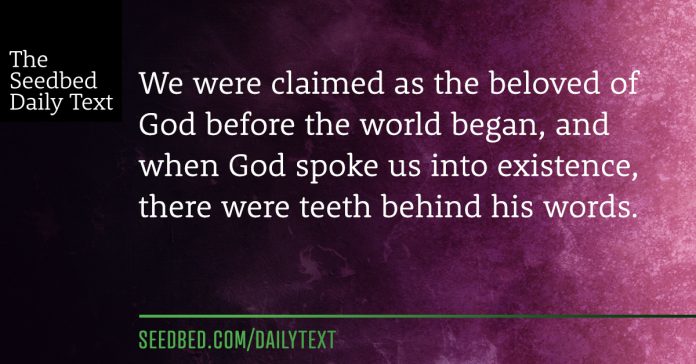 He proclaimed, “The one who is more powerful than I is coming after me; I am not worthy to stoop down and untie the thong of his sandals. I have baptized you with water; but he will baptize you with the Holy Spirit.”

In those days Jesus came from Nazareth of Galilee and was baptized by John in the Jordan. And just as he was coming up out of the water, he saw the heavens torn apart and the Spirit descending like a dove on him. And a voice came from heaven, “You are my Son, the Beloved; with you I am well pleased.”

Getting to know myself as the beloved of God has been one of the great discoveries of my life. I started out pretty early thinking that life would be a lot better if I looked differently, thought differently, and acted differently from the way I was naturally. It seemed like I invariably fell short among my peers, either in their estimation or in my own.

As I grew, I developed the idea that I needed to try hard to make myself acceptable to God, too. I would berate myself every time I failed to live up to my own spiritual expectations. For this recovering legalist and people-pleaser, the word beloved continues to ring freedom into my soul. It is in the Father’s word of love over Jesus that I encounter my own belovedness, too.

Beloved is a word with teeth. It is not a saccharine word. This good news is not meant to merely pat you on the back and make you feel better about yourself.

This word claims you.

In the words, “You are my beloved son,” the Father gave Jesus his anchor, his root, the one truth that he could hold onto in the future when everything else would be ripped away. The Father’s declaration of love claimed Jesus so deeply that it would sustain him all the way until the end.

Beloved is a title that’s freely given to you—for just being you.

Before Jesus ever became known as the Messiah, the Father defined him as his beloved son. Jesus was given an identity that didn’t depend on what anybody else thought about him or what he might be tempted to think about himself. He was his Father’s beloved son. Nobody could change that, not even Jesus.

It’s the Father’s choice of love that makes us the beloved.

It’s the Father’s choice to claim us that makes us his.

I told you earlier that the word beloved is a word “with teeth.” Whatever “has teeth” has power and authority standing behind it. Being the beloved child of God “has teeth” because the one who is standing behind that fundamental identity is the Creator of the universe. Even if the whole world falls, our fundamental identities as the beloved children of God will still stand.

There is an intrinsic hope in this identity for all who suffer.

God is a Father who takes care of his own.

God raises the dead on the third day.

In the movie The Lion King, Simba has run away from home out of guilt over his father’s death. One night he is drawn by a wise guide, Rafiki, to a pool of water. In that water, Rafiki tells him that he will find his father. But Simba only sees himself. Rafiki urges him to look again, that his father Mufasa is in him. Suddenly Simba’s reflection changes to Mufasa’s and he sees Mufasa surrounded in light, urging him, “Remember who you are.”

His father claimed him when he was born and there were teeth behind his words.

It’s the same with you me.

We are children of a king who is not of this world, a king whose kingdom of liberation and light has come, is coming, and will come again, a king who will not stop until every wrong is made right and every captive is set free. We were claimed as the beloved of God before the world began, and when God spoke us into existence, there were teeth behind his words.

May we dare to remember who we are.

Father, here I am, your beloved one.
I receive your words over my life:
I am your beloved child. You are well pleased with me.
Spirit of God, breathe these words deep into my heart today.