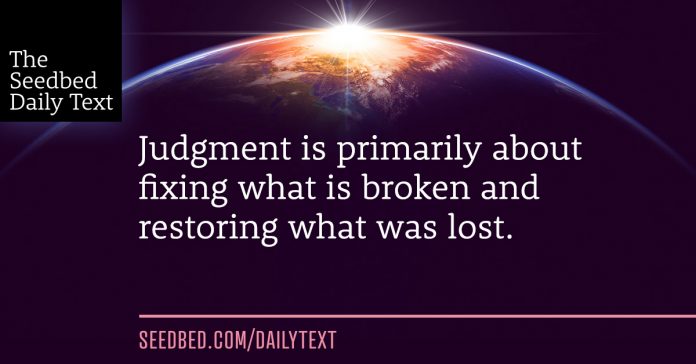 11 Let the heavens be glad, and the earth rejoice!
Let the sea and everything in it shout his praise!
12 Let the fields and their crops burst out with joy!
Let the trees of the forest sing for joy
13 before the Lord, for he is coming!
He is coming to judge the earth.
He will judge the world with justice,
and the nations with his truth.

Yesterday we looked at how the return of Jesus is good news that should bring joy, not fear. But another reason we many not be ready for his return (or want it to happen) is because of one little word that comes back with Christ: Judgement.

I’ve been called for jury duty once. It was a civil case involving a hospital. Someone had done something wrong, and a someone had to pay… a lot. I was the last potential juror sent home. When the judge called my number and said I could go, I was a little bummed. I wanted to see it play out. I had visions in my head from every courtroom drama I’d ever watched, imagining the witness shout, “You can’t handle the truth.”

But honestly, I wanted to see someone get their comeuppance. Isn’t that the best part of a courtroom scene: anticipating the verdict? And think of all the major court cases that have played out in real life in our country . . . millions waiting to hear if their version of justice will be handed down, and then many responding with either relief or rage.

We tend to think of a judge as someone who frees those who are innocent, but more often hands down punishment to those who have done wrong. And if we’re honest, many times when we say “justice” what we really mean is “revenge.”

But my friend Steve Seamands explains in his book, Give Them Christ, how in the days of the Bible, judgement was “not primarily about rewards and punishments or balancing scales, but about fixing what’s been broken and making wrong things right.”

He points to N.T. Wright, who explains judgment as a celebration of today’s text: “In a world of systematic injustice, bullying violence, arrogance and oppression, the thought that there might come a day when the wicked are firmly put in the their place and the poor and weak are given their due is the best news there can be.”

There’s that idea again: Jesus coming back is good news.

So what verdict are we anticipating from Christ when he returns? What will his judgment be? Let the poet give us a clue:

5 But joyful are those who have the God of Israel[a] as their helper,
whose hope is in the Lord their God.
6 He made heaven and earth,
the sea, and everything in them.
He keeps every promise forever.
7 He gives justice to the oppressed
and food to the hungry.
The Lord frees the prisoners.
8     The Lord opens the eyes of the blind.
The Lord lifts up those who are weighed down.
The Lord loves the godly.
9 The Lord protects the foreigners among us.
He cares for the orphans and widows,
but he frustrates the plans of the wicked.

What do we want? Justice.

When do we want it? Now.

Heavenly Father, each of us is waiting for your final justice in our lives, and in the whole world. All your people on Earth, and all your creation, are eager for the final verdict to be handed down. Help us get ready. Give us hopeful anticipation. In Jesus name. Amen.

1) What do most often think of when you hear the word justice? Does it sound like the first description in today’s reflection?
2) What do you think of this biblical idea of justice? Have you ever heard or thought of it like that before? How does that impact you?