Why We Have Apocalyptic Anxiety - Seedbed
close
Menu 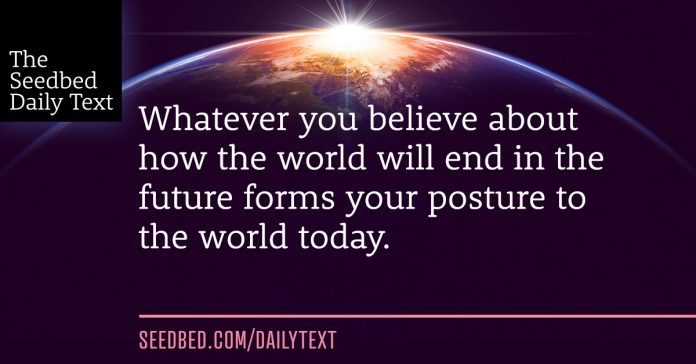 6 And you will hear of wars and threats of wars, but don’t panic. Yes, these things must take place, but the end won’t follow immediately. 7 Nation will go to war against nation, and kingdom against kingdom. There will be famines and earthquakes in many parts of the world. 8 But all this is only the first of the birth pains, with more to come.

29 “Immediately after the anguish of those days,
the sun will be darkened,
the moon will give no light,
the stars will fall from the sky,
and the powers in the heavens will be shaken.
30 And then at last, the sign that the Son of Man is coming will appear in the heavens, and there will be deep mourning among all the peoples of the earth. And they will see the Son of Man coming on the clouds of heaven with power and great glory.

The return of Jesus is the end of the world as we know it, and it sounds terrifying. So then many of us go to extremes: we either avoid it, or try to control it. We steer clear of preaching and teaching about it altogether, or spend an unhealthy amount of time trying to figure out a “road map” of the end times.

That’s what fear does, and as Jedi Master Yoda says, “Fear leads to anger, anger leads to hate, and hate leads to suffering.”

So if his return is something to celebrate at Advent, why are we so afraid of it? Maybe before we look at what the return of Jesus is, we should look at what it isn’t.

Here’s a little story for you:

In my church youth group days, we spent a lot of time talking about how the world would end and getting married. For most us, the main take-away was hoping we got married before Jesus came back.

But a lot of folks took it very seriously, including my mom’s Sunday school teacher. Almost every lesson involved reading the headlines and getting ready for the end, which could come at any moment. She taught the class from cassette tapes and books by popular end-times preachers, who combined current events and Scripture in an attempted to predict a target date for the return of Christ. They said there would be global cataclysms to signal the end of the world, and the big question was, “Are you ready?”

Then one day, the teacher and her family disappeared. They sold their house, quit their jobs, and moved to rural Texas. They bought some remote property, stocked up on food, water, and other supplies . . . and waited.

Five years later we saw them at the grocery store, after they moved back.

But panic has helped create an end-times industrial complex: Preachers, teachers, conferences, books, movies – all aimed at predicting when Christ will return and what will happen to the world—have steadily flooded the Christian consumer market.

And at the heart of this complex is a theology that says an already dark world will be plunged into utter despair, Christians will be taken away, and Jesus will return to settle the score and wipe the whole place out.

That sounds more like revenge than restoration. That’s a reason to celebrate Advent?

No. The return of Jesus is part of the gospel, which is good news. Anything that operates out of fear and violence is not good news.

Those wars, famines, and earthquakes—and the lives they destroy—aren’t God’s warm-up act for the end. They are the consequences of the sins Jesus is coming back to undo.

Whatever you believe about how the world will end in the future forms your posture to the world today. So things will be bad.. and may get worse. But don’t panic. He’s going to come back in great glory. So let’s stop spreading fear about it, and instead spread some joy to the world.

Heavenly Father, only you know when the end will come, and your Son told us not to panic. But we confess that sometimes we do. Forgive us for when we have let that panic control us. Free us from fear, and release us to joy, knowing that Jesus’ return is a good thing. In his name we pray. Amen

1) Are you afraid of the end of the world? Why?
2) What do you think joy about the return of Christ could look like instead of fear?

© Seedbed 2021
Why We Have Apocalyptic Anxiety
MORE STORIES