The Apostle Paul and Praying in Restaurants - Seedbed
close
Menu 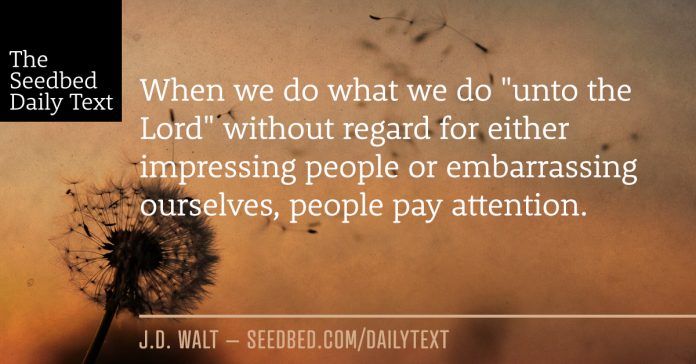 Just before dawn Paul urged them all to eat. “For the last fourteen days,” he said, “you have been in constant suspense and have gone without food—you haven’t eaten anything. Now I urge you to take some food. You need it to survive. Not one of you will lose a single hair from his head.” After he said this, he took some bread and gave thanks to God in front of them all. Then he broke it and began to eat. They were all encouraged and ate some food themselves. Altogether there were 276 of us on board. When they had eaten as much as they wanted, they lightened the ship by throwing the grain into the sea.

Paul never ceases to amaze me. For starters, as I noted last week, Paul has somehow risen to be the defacto leader of the ship. (O.K. we know it was the Spirit) Look at how his leadership continues today. This is no small thing. Remember, Paul was a PRISONER.

Today’s text shows us a scene right out of the last supper. After urging them to eat after fourteen days of no food (which is a desperate condition in and of itself), he encourages them that everything is going to be fine. Now watch this:

“. . . he took some bread and gave thanks to God in front of them all. Then he broke it and began to eat.”

“Jesus took bread, and when he had given thanks, he broke it and gave it to his disciples, saying, “Take and eat; this is my body.”

OK, he didn’t go that far. Why do I point this out? This approach to a meal was the standard approach of the Jews. Those verbs, took, blessed, broke (and gave) are consistent from Jesus feeding of the five thousand to the Last Supper to the present text. It was standard, part of Paul’s training as a believer and something he probably did without thinking.

What interests me is the way the text is careful to tell us that Paul did this “in front of them all.” I don’t think he was trying to make an intentional show of his religion as much as he was just doing what he does no matter where he was.

Here’s the turn—do you pray before your meals when eating in a public place? People differ on whether they think this is appropriate. Some think it is making a public show of their religion; wearing it on their sleeves so to speak. Others do it to make an intentional witness of their faith to whoever is around. I see both of these approaches as missing the point.

Whatever happened to the simple idea that 1. God provided the blessing of this food, and 2. We want to thank him for that; no matter what, where, when or with who. The reality is the same. God provided. We give thanks. It’s a fundamental fundamental. We don’t do it to demonstrate our faith, nor do we concern ourselves about what others will think about us “making a show of our religion.” This is not about other people. This is about God and gratitude. This is who we are. We are the same at home and in church and at Chik-fil-A.

When we do what we do “unto the Lord” without regard for either impressing people or embarrassing ourselves, people pay attention. It’s when we aren’t trying so hard to get people’s attention that we tend to gain it.

Do you tend to offer a prayer over meals when in public places? Why or why not? Backing up, do you do it at home?

© Seedbed 2021
The Apostle Paul and Praying in Restaurants
MORE STORIES