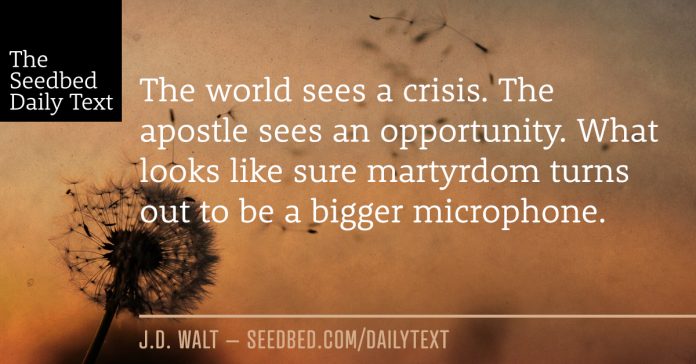 The commander came up and arrested him and ordered him to be bound with two chains. Then he asked who he was and what he had done. Some in the crowd shouted one thing and some another,and since the commander could not get at the truth because of the uproar, he ordered that Paul be taken into the barracks. When Paul reached the steps, the violence of the mob was so great he had to be carried by the soldiers. The crowd that followed kept shouting, “Get rid of him!”As the soldiers were about to take Paul into the barracks, he asked the commander, “May I say something to you?”“Do you speak Greek?” he replied. “Aren’t you the Egyptian who started a revolt and led four thousand terrorists out into the wilderness some time ago?”Paul answered, “I am a Jew, from Tarsus in Cilicia, a citizen of no ordinary city. Please let me speak to the people.”After receiving the commander’s permission, Paul stood on the steps and motioned to the crowd. When they were all silent, he said to them in Aramaic . . .

Remember Agabus? He was right. Just as prophesied, Paul found himself bound in two chains. Jerusalem was turning out to be all the Holy Spirit promised. Utter pandemonium prevailed. The soldiers thought Paul was some kind of jihadist. It’s hard to imagine the level of vitriol and violence being spewed at Paul. The “peace of Jerusalem” felt like a pipe dream.

So what about Paul? Was he scared out of his wits? Not a chance. In the midst of all this chaos, Paul saw his moment. He played the citizenship card. He asked for the microphone. A silent hush fell over the crazed crowd. He began speaking in Aramaic . . .

Maybe you’ve heard the (perhaps apocryphal) story about the Chinese word for crisis? They say it also means “opportunity.” That’s the case here. The world sees a crisis. The apostle sees an opportunity. What looks like sure martyrdom turns out to be a bigger microphone.

It’s moments like these that give Paul the coin to say things like, “Do not be anxious about anything, but in every situation, by prayer and petition, with thanksgiving, present your requests to God. And the peace of God, which transcends all understanding, will guard your hearts and your minds in Christ Jesus.” (Philippians 4:16-17)

Consider this a case study.

It’s moments like these that give Paul the credibility on top of credibility to say things like, “Finally, be strong in the Lord and in his mighty power. Put on the full armor of God, so that you can take your stand against the devil’s schemes. For our struggle is not against flesh and blood, but against the rulers, against the authorities, against the powers of this dark world and against the spiritual forces of evil in the heavenly realms. Therefore put on the full armor of God, so that when the day of evil comes, you may be able to stand your ground, and after you have done everything, to stand.” (Ephesians 6:10-13)

Consider this a case study.

As they say, a hater’s gonna hate. So what does an apostle say to a crowd of haters in a moment like this? Stay tuned.

Reflect on this statement: “What looks like sure martyrdom turns out to be a bigger microphone.”