Are You a Real Gospel Soldier? - Seedbed
close
Menu 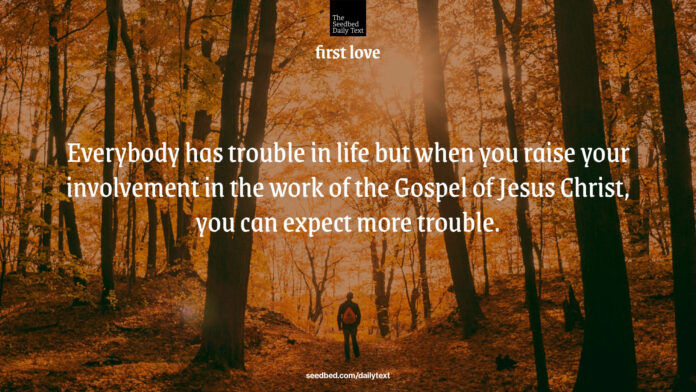 But I think it is necessary to send back to you Epaphroditus, my brother, co-worker and fellow soldier, who is also your messenger, whom you sent to take care of my needs. For he longs for all of you and is distressed because you heard he was ill. Indeed he was ill, and almost died. But God had mercy on him, and not on him only but also on me, to spare me sorrow upon sorrow. Therefore I am all the more eager to send him, so that when you see him again you may be glad and I may have less anxiety.

In the ancient world, the state didn’t take care of prisoners. This is why the Philippian church sent Epaphroditus. Don’t you love it how the Philippians owned Paul’s welfare? Of all the churches, they stepped up big time. That’s why Paul is so grateful to them. Epaphroditus likely contracted some kind of illness on his way to Rome, but rather than turn back, he risked his life to fulfill the mission. When he arrived and began to assist Paul, his sickness got worse, taking him to the brink of death.

Everybody has trouble in life, but when you raise the stakes on your involvement in the work of the gospel of Jesus Christ, you can expect more trouble.

It’s very interesting, the ways Paul refers to Epaphroditus in today’s text. Did you catch it: “my brother, co-worker and fellow soldier”? There’s a progression here. Epaphroditus, by virtue of following Jesus, is Paul’s “brother.” By virtue of coming alongside Paul in Rome, he became a “co-worker” in the gospel. Paul takes it a giant step further when he calls him a “fellow soldier.” We need to catch the weight of this. Paul doesn’t just throw this around as in, “Onward, Christian soldier.” He means Epaphroditus stepped out of the comforts of Philippi’s suburban life and onto the frontlines of the war and took on enemy fire. Epaphroditus’s illness was an act of spiritual warfare. Satan tried to take him out.

Sometimes we overinterpret the bad things that happen to us as spiritual warfare. When we claim spiritual warfare, we, in effect, claim our status as soldiers. We must ask ourselves: Why would Satan bother with attacking me? How is my life and work threatening his kingdom? The term spiritual warfare has come to be used quite casually.

By way of an opposite analogy, consider the war on terrorism. If you are related to suspected terrorists or harbor suspected terrorists or in any way help them or fund them or get involved with them on social media or anywhere else, you can bet that someone in law enforcement is going to be assigned to watch you like a hawk. By your active involvement, you make yourself an enemy of the state, who will do everything they can to name you an enemy combatant, which empowers them to come after you with everything they’ve got.

Satan is real. Principalities and powers and rulers and authorities are real. There is a real kingdom of darkness (Eph. 6:12). The minute you step out of the ranks of casual Christianity and offer yourself for an assignment in God’s kingdom, you enter the ranks of enemy combatants, and you can bet some demonic agent of darkness is being assigned to you.

This is why Paul, in his letter to the Ephesians, gets so explicit about putting on the full armor of God (Eph. 6:11, 13-17). Domesticated casual Christianity is no threat to the enemy. I’ve been writing a lot of personal letters lately to people who have given of their resources to our work with Seedbed. Be assured if you did this, your name is on my prayer list, but it is also on another list. You are making yourself an enemy combatant to the kingdom of darkness. Put on the full armor of God.

I don’t want to overestimate my role and work in the kingdom of God, but I now find myself behind enemy lines and deep in hostile territory. For the past seven years, I have been under withering enemy fire. I know I am to the apostle Paul as a foot soldier is to General Patton, but the battle is real. I consider all of you as brothers and sisters in the Lord, many of you as co-laborers in the gospel, and still others as fellow soldiers in the thick of this war on darkness. Some of you have jumped into the foxhole with me. I am eternally grateful, but in case I was not clear: now is the time to put on your armor.

Abba Father, we thank you for your Son, Jesus, who will win the battle. Thank you that though we take on fire and may get sick to the point of death and even die, we are invincible in him. We want to be more in the line of fire for your kingdom. We don’t want to reach the end and realize we played it safe. We pray in Jesus’ name, amen.

© Seedbed 2021
Are You a Real Gospel Soldier?
MORE STORIES