Are You Raising Your Hand Yet? - Seedbed
close
Menu 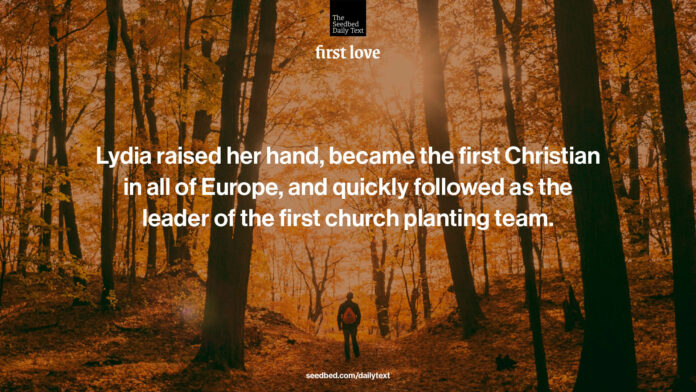 So then, welcome him in the Lord with great joy, and honor people like him, because he almost died for the work of Christ. He risked his life to make up for the help you yourselves could not give me.

Epaphroditus raised his hand. He took on a hard assignment. We still tell his war story today. We honor Epaphroditus and people like him. From the first century to the twenty-first century, Jesus establishes his kingdom, on earth as it is in heaven, through the faith, courage, and obedience of ordinary people like Epaphroditus.

Let’s remember how Paul got to Philippi in the first place. Remember his dream where the man from Macedonia beckoned him to come to them? Philippi was the first destination. Here’s the account from Acts 16:

On the Sabbath we went outside the city gate to the river, where we expected to find a place of prayer. We sat down and began to speak to the women who had gathered there. One of those listening was a woman from the city of Thyatira named Lydia, a dealer in purple cloth. She was a worshiper of God. The Lord opened her heart to respond to Paul’s message. When she and the members of her household were baptized, she invited us to her home. “If you consider me a believer in the Lord,” she said, “come and stay at my house.” And she persuaded us. (vv. 13-16)

Paul saw a man in his dream, but it was a woman who would bring it to fulfillment. Lydia raised her hand, became the first Christian in all of Europe, and quickly followed as the leader of the first church-planting team.

No one knows the story at the outset. They just raise their hand and do the next right thing. It’s never about the numbers—only the name. They think big, act small, pray hard, and love well. O Lord, I want to be in that number—found in that name!

My mind runs to eighteenth-century England and colonial America. John Wesley was looking for someone to go to America to encourage the fledgling Methodists in the new world. Twenty-six-year-old Frank Asbury raised his hand. He took on a hard assignment. He arrived to find 316 Methodist society members. He road an average of 6,000 miles a year on horseback, a total of some 270,000 miles. He preached upward of 15,000 sermons, ordained four thousand clergymen, and presided over 224 annual conferences of the burgeoning movement. He made an annual salary of eighty dollars. Forty-five years later, the movement had grown to 215,000.

To this day, those Methodists were the first and only group in history to plant a church in every county in this country. I keep thinking to myself, Why not now, Lord? Why not us?

I see that hand.

Abba Father, we thank you for your Son, Jesus, who, being in very nature God did not consider equality with God something to be grasped, but he raised his hand. Thank you for Paul and Timothy and Epaphroditus and Lydia and John and Frank and Jessica and Scot and Julian and Mary and Sid and Micah and David and Mark and Andrew and Andy and Jessie and Holly and Darlene and so many more who have raised their hand. Come, Holy Spirit, and increase this tribe. O Lord, we want to be in that number—found in that name—the name in which we pray, Jesus, amen.

P.S. – Please do take a look at our upcoming mini-course on The Day of Ascension. It will be rich, and likely something you have never considered much.