Are You the Kind of Person Jesus Can Trust? - Seedbed
close
Menu

9 As they were coming down the mountain, Jesus instructed them, “Don’t tell anyone what you have seen, until the Son of Man has been raised from the dead.”

10 The disciples asked him, “Why then do the teachers of the law say that Elijah must come first?”

11 Jesus replied, “To be sure, Elijah comes and will restore all things. 12 But I tell you, Elijah has already come, and they did not recognize him, but have done to him everything they wished. In the same way the Son of Man is going to suffer at their hands.” 13 Then the disciples understood that he was talking to them about John the Baptist.

How hard would it be to not “tell anyone what you have seen” when you’ve seen something like this? Jesus had entrusted them with a revelation to be shared only after his resurrection. Why? I think he probably only had three disciples who he knew a) were mature enough to be brought in on such a reality and b) who might have the capacity to keep it confidential.

Remember what he said to the group back at Pan (aka Caesarea Philippi)?

“Truly I tell you, some who are standing here will not taste death before they see the Son of Man coming in his kingdom.”

These three were the “some” Jesus was referring to. He gave them a peek behind the thin veil separating Heaven and Earth. Why them? I think it’s because Jesus knew he could trust them. He saw through to their innermost selves and saw something trustworthy there. He also recognized they knew him in a way perhaps unlike the rest of the group. These will be the three he will take with him into the depths of Gethsemane. Was this trip to the highest mountain a way of preparing them for the lowest valley?

I don’t think it says anything negative about the other 9 as much as it says something exceptional about the 3.

As I continue to reflect on this transfiguration I am once again struck by the obvious. All the energy and focus seems to go into our trusting Jesus. I’m beginning to think there comes a point when the issue is whether Jesus can trust us.

Have you ever thought about that? Sometimes we get arrested in our growth in faith at this point of trusting Jesus. I know I have—and may still be. Frankly, I suspect most of us bounce around, back and forth in this stage of faith. We trust and we don’t trust. Maybe this is the case because we haven’t really seen anything beyond this. Maybe it hasn’t hit us that Jesus wants to lead us to a place where our trust in him is sealed in such a way that the path then becomes about Jesus trusting us.

That’s where I want to be. And if I know you, it’s where you want to be too. 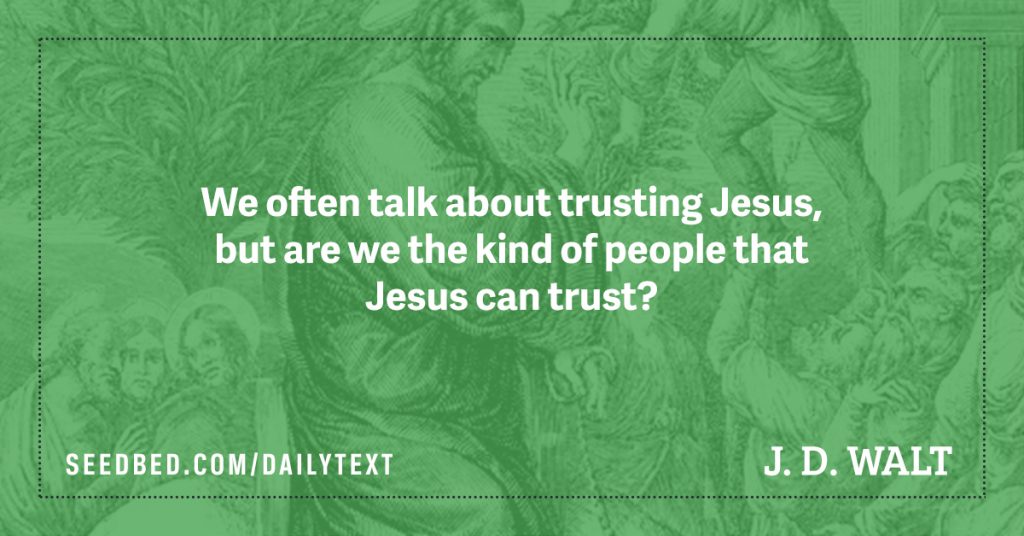 1. So what’s your theory on why Jesus chose these three disciples to climb the Mount of Transfiguration and then to descend to the valley of Gethsemane?

2.  What would it mean to become the kind of person Jesus can trust? How would that shift the focus of your discipleship?

3. How would you know if Jesus did trust you? What would that look like if he did?