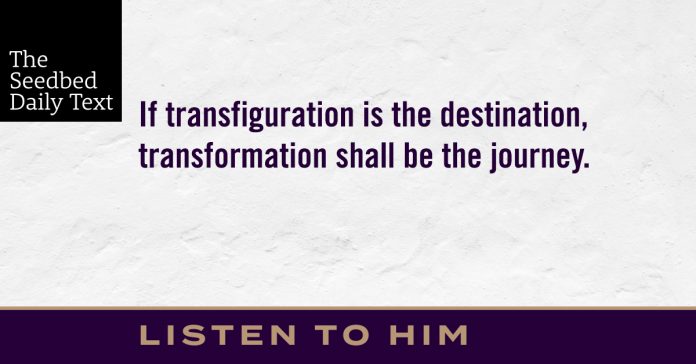 About eight days after Jesus said this, he took Peter, John and James with him and went up onto a mountain to pray. As he was praying, the appearance of his face changed, and his clothes became as bright as a flash of lightning. Two men, Moses and Elijah, appeared in glorious splendor, talking with Jesus. They spoke about his departure, which he was about to bring to fulfillment at Jerusalem. Peter and his companions were very sleepy, but when they became fully awake, they saw his glory and the two men standing with him. As the men were leaving Jesus, Peter said to him, “Master, it is good for us to be here. Let us put up three shelters—one for you, one for Moses and one for Elijah.” (He did not know what he was saying.)While he was speaking, a cloud appeared and covered them, and they were afraid as they entered the cloud. A voice came from the cloud, saying, “This is my Son, whom I have chosen; listen to him.” When the voice had spoken, they found that Jesus was alone. The disciples kept this to themselves and did not tell anyone at that time what they had seen.

We have arrived; Transfiguration Mountain.

Shrove Tuesday on Transfiguration Mountain. That about says it all doesn’t it?

If yesterday we heard the question of all questions, we might call this the conference of all conferences. This is the conference of the counsel of the Kingdom of God. Moses represents the Law. Elijah reps the Prophets. Rather than representing the Gospel, Jesus is the Gospel in whom the Law and the Prophets are not only fulfilled but extended into all Eternity. Then there are the Apostles who will be the Church and who represent us. The Law, the Prophets and the Gospel come face to face with the Rock and the Sons of Thunder; the future Church.

Jesus, God’s Messiah, miraculously unites not only Divinity and Humanity, but Heaven and Earth and even the Past and the Future. In this instance, the representatives of the past are brought into the presence of the representatives of the future and all for the purpose of together beholding the Glory of God in the face of Jesus Christ, who was and is and is to come!  Everything, literally everything comes together and coheres and transforms, no, transfigures in Him. Transformation is to Transfiguration as resuscitation is to Resurrection.

As he was praying, the appearance of his face changed, and his clothes became as bright as a flash of lightning.

This is not a dream or a vision or some otherwise ethereal cathartic experience. This, my friends, is the tangible revelation and manifestation of Ultimate Reality.

The Son is the image of the invisible God, the firstborn over all creation. For in him all things were created: things in heaven and on earth, visible and invisible, whether thrones or powers or rulers or authorities; all things have been created through him and for him. He is before all things, and in him all things hold together. Colossians 1:15-18.

“Truly I tell you, some who are standing here will not taste death before they see the kingdom of God.”

Isn’t that what Paul was saying?

On this mountain, the paper thin veil between Heaven and Earth is pulled back and we behold Eternity as a snapshot in time.

When the Kingdom finally comes in all its glory, this is what we will see: Abraham and Sarah, Isaac and Rebekah, Jacob and Joseph, Moses and Ruth and Samuel and David and Elijah and Mary and Peter and James and John and Lydia and Dorcas and Paul and Barnabas and Perpetua and Polycarp and your grandparents and mine and those loved ones in the Lord who succumbed to cancer and tragedy and the children that left us too soon. Together, we will all be transfigured. “And just as we have borne the image of the earthly man, so shall we bear the image of the heavenly man.” 1 Corinthians 15:49.

And at the center of it all we will behold the Risen Son of God, the one who not only tasted death but who, as Isaiah prophesied, “will swallow up death forever.”

Just when the disciples thought the Kingdom had come, and they should make camp, the conference was over. This would prove to be the turning point, the hinge on which the door to the Gospel would swing open. From this mountain top transfiguration high, Jesus will lead us to the lowest place, where the Son of Man will be disfigured on the cross.

That’s why Transfiguration Mountain is all at once the best and worst place on the planet to get ready for Ash Wednesday. Ash Wednesday opens the doorway to descent, the place where the truth of our mortality is met with the promise of eternity. “From dust you have come and to dust you will return. Repent and believe the Gospel.” If transfiguration is the destination, transformation shall be the journey.

One more thing . . . I didn’t mention it, but we got a pretty big word from God on Transfiguration Mountain.

“This is my Son, whom I have chosen; listen to him.”

LISTEN TO HIM. That will be our agenda for these next 40 days as we make our way down the mountain and up to Jerusalem. Luke, our skillful guide, will lead the way ahead. We will reconvene and regroup tomorrow at the foot of the mountain.

What does the phrase “Repent and believe the gospel” mean to you at this moment in your life?