Attractive vs. Attractional: Difference Between Beauty & Too Much Make-up
close
Menu 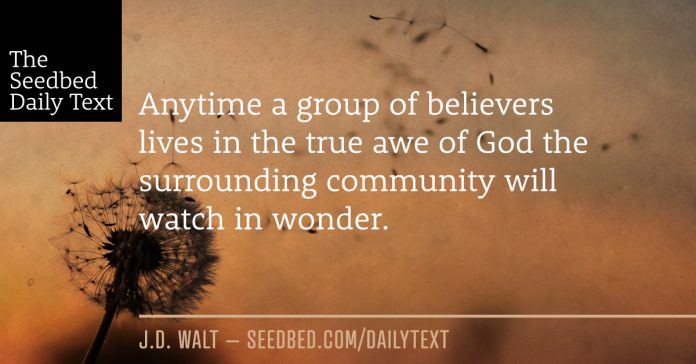 The apostles performed many signs and wonders among the people. And all the believers used to meet together in Solomon’s Colonnade. No one else dared join them, even though they were highly regarded by the people. Nevertheless, more and more men and women believed in the Lord and were added to their number. As a result, people brought the sick into the streets and laid them on beds and mats so that at least Peter’s shadow might fall on some of them as he passed by. Crowds gathered also from the towns around Jerusalem, bringing their sick and those tormented by impure spirits, and all of them were healed.

1. The believers met together in Solomon’s Colonnade (another name for porch).

2. They were highly regarded by all the people.

3. No one else dared join them.

4. Nevertheless, more and more men and women believed in the Lord and were added to their number.

Anybody see a problem with this or is it just me?

How is the Lord adding to their number when people do not “dare” to join them? It doesn’t sound particularly missional, yet the mission advanced mightily. Here we see an attractive church not built on the attractional model of church.

Let’s call this, The Quandary of Solomon’s Porch.

Could it be that the people highly regarded the believers because the believers lived in awe of God? What if the converse is also true?

Could it be that people do not highly regard believers when believers do not live in awe of God?

Anytime a group of believers lives in the true awe of God the surrounding community will watch in wonder.

But I guess the big lesson here is the obvious one. For better or for worse, the surrounding community is paying attention.

Attractional churches work hard to make God attractive to outsiders. Attractive churches focus all their energy on living in awe of God. Maybe the distinction is something akin to the self-forgetfulness of bearing one’s natural beauty, blemishes and all, and putting on too much makeup.

So here’s a next step for us. Rather than lament the sorry state and lukewarm witness of the church today, how about we just start living in awe of God?

Do you see the difference between being “attractional” and becoming authentically “attractive?” What might this have to do with learning to live in awe of God?

© Seedbed 2021
Attractive vs. Attractional: The Difference Between Beauty and Too Much Make-up
MORE STORIES