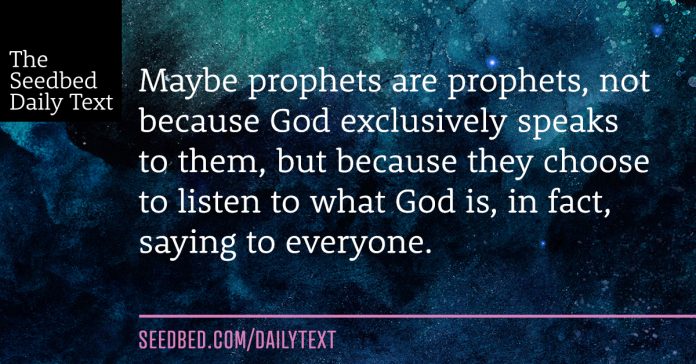 “There was also a prophet, Anna the daughter of Phanuel, of the tribe of Asher. She was of great age, having lived with her husband seven years after her marriage, then as a widow to the age of eighty-four. She never left the temple, but worshipped there with fasting and prayer day and night. At that moment she came, and began to praise God and to speak about the child to all who were looking for the redemption of Jerusalem.”

Simeon is referred to as a righteous and devout man, who had eagerly awaited the Messianic fulfillment. He lays eyes upon Jesus and proceeds to praise the God who sent him, and to speak words of encouragement to Mary and Joseph. Anna was no doubt righteous and devout as well, but she is specifically referred to as a prophet. Seeing Jesus puts her directly into preaching mode. She does pause to give praise where praise is due, but spreading the Good News to anyone who would listen seemed to be her most urgent priority.

While acknowledging the difference in self-expression, I suspect that it was a set of shared attributes that opened both sets of eyes to the same reality. In Simeon and Anna, we have two individuals whose lives were permeated by spiritual practice. Calling Simeon “righteous and devout” certainly implies a life of discipline and devotion. With Anna, the description is more explicit. In a span of three verses, we are told that she is devoted to prayer, fasting, and chastity. She recognized Jesus and proclaimed it to the masses because she was a prophet. But to what do we attribute her prophetic gifting? Did it have anything to do with her holy lifestyle?

I suggest that praise and prophetic speech flow as a result of revelation. Anna’s ascetic lifestyle heightened her spiritual senses, which allowed her to receive revelation. The revelation itself served as a catalyst for prophetic speech. So maybe God doesn’t only speak to prophets. Maybe prophets are prophets, not because God exclusively speaks to them, but because they choose to listen to what God is, in fact, saying to everyone.

Spirit of the Living God, challenge us in our apathy, and forge us into a community of prophets.