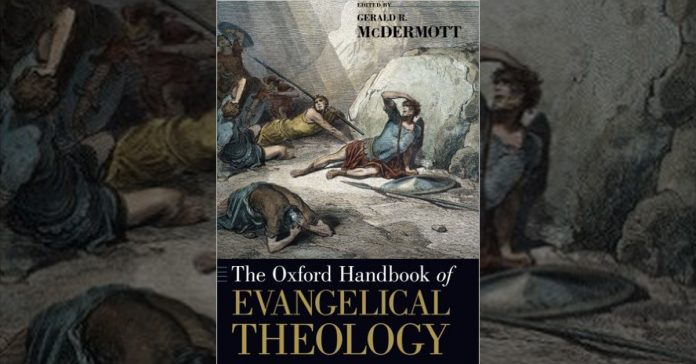 The paperback edition of The Oxford Handbook of Evangelical Theology has just been released by Oxford University Press (524 pp.). The original hardback was published in 2010.

This is a marvelous book, and I am glad to recommend it. But I have a big issue with one of the articles. The release of the paper edition prompts me to explain why.

This Oxford Handbook is edited by Gerald R. McDermott of Roanoke College. It has 32 essays on a wide variety of topics, from hermeneutics to major doctrines to a range of ethical issues. Contributors include Mark Noll, Kevin Vanhoozer, Alister McGrath, Loren Wilkinson, Craig Keener, Dallas Willard—and just one woman, Cherith Fee Nordling, writing (predictably)  on “Gender.” My own essay is titled “Spiritual Gifts.”

Of the essays I’ve read so far, many are excellent. But one is appalling! It is entitled simply “Economics” and is by John Lunn, professor or economics at Hope College in Michigan. I hope this essay does not represent what most Evangelicals think about economics. But I know it’s a fairly common view, especially in the United States.

The essay abounds with problems. Since I want to keep this short, I focus on the biggest one. Here it is: Lunn discusses (superficially) Scripture, then describes a few (not all) economic systems, and then concludes, in effect: The Bible says quite a bit about economics, the poor, ethical responsibility, and so on, but what it teaches about economics is mostly irrelevant today. The Bible reflects an agrarian society, but we live now in a developed global economy in which the dominant system is capitalism. Capitalism has many virtues, and as Christians we should try to make it as humane as possible.

I count half a dozen or more logical fallacies or invalid dichotomies in the essay. Put them together and they compose one big overriding fallacy: That the extensive biblical teachings on economics are not really applicable today—other than perhaps at a personal, private level, or maybe for simple agrarian folk.

Lunn’s main bad example here is the minimum wage—a favorite target of rightwing economists and politicians. But in fact the minimum wage is a wide open question. A good amount of research shows that instituting a rational minimum wage produces much more good generally to the whole economy than not having one, or keeping it too low—and that on balance, the consequences, intended and otherwise, are much more positive than negative. The wider populace benefits, not just those at the top. Lunn’s argument here is simply invalid.

And there’s more. Here are two examples of the kinds of unbiblical dichotomies by which the author voids most biblical teaching on economics:

Lunn argues: “It is inappropriate to take comments about the wealthy in the New Testament and apply them anachronistically to modern market societies. In the biblical era [sic, as if that were one continuous, static period], the wealthy were exploiters virtually by definition. Today, ‘rich’ and ‘poor’ are economic descriptions and not descriptors of attitudes or behavior (greedy and exploitive for ‘rich’) and plights (changes in inherited status for ‘poor’)” (p. 495).

Of course biblical “comments” should not be applied “anachronistically”—that is a given. But they can be applied legitimately. The deeper problem here however is Lunn’s assertion that “rich and poor,” once moral categories, are today merely economic descriptors. This is a fallacy. As many scholars have pointed out, rich and poor in the Bible are both, at the same time, economic and ethical. Same today. Capitalism and a modern global economy do not cleanse “rich” and “poor”—wealth and poverty—of their moral and ethical content and weight.
In the Bible and today, economic condition is both an economic and an ethical issue. Thus also asocial and political issue.

In another horrid dichotomy the author writes that, unlike in biblical times, “the economy is now impersonal rather than personal.” Thus the practice of gleaning (for example) is totally irrelevant now since “there are nonprofit organizations that fulfill a similar function.” (No role for government, apparently.) Thus “the practice of gleaning has been altered to account for changes in farming practices and technology, and the more impersonal nature of economic interactions.”

But this personal/impersonal dichotomy is a myth. Clearly many people in the Bible experienced economic forces as impersonal. Think of the Egyptian, Assyrian, and Roman empires. Mary and Joseph went to Bethlehem not because of personal economic factors but because of the impersonal force of the Roman census (both political and economic).

And so on. The essay is full of such assumptions and unsupported assertions. But to assert something (as in the examples above) is not proof and is not convincing. Much of the essay is in fact built on unexamined assumptions.

It’s clear by the end of the essay that Lunn’s passion is not to explain biblical economics but rather to defend market economics. He makes some good points about the benefits of market economies. But the essay fails to explain the high relevance of the Bible for all economic systems and its prophetic critique of any economy that violates biblical ethics or despoils the earth. (I deal briefly with this in Salvation Means Creation Healed and Liberating the Church.)

It turns out that the author’s main prophetic voice is Frederick A. Hayek (1899-1992), the Austrian economist and author of The Road to Serfdom—very popular today among ideologically conservative economists. (See http://en.wikipedia.org/wiki/Friedrich_Hayek.)

I agree with much that Lunn says about the positive benefits of market economies. But we need to see the weakness and one-sidedness of this as of all theories. And our survival (economic and otherwise) depends on taking the earth seriously.

The economist who does this best, so far, is Herman Daly, who is a Christian. His book with Joshua Farley, Ecological Economics: Principles and Applications (Washington DC: Island Press, 2004) puts economics in a much broader framework than does Lunn. Most importantly, Daly and Farley take the earth seriously. They point out the myth in classical economics: that “natural resources” are a subset within the larger circle of economics. In fact, as the earth itself is teaching us, the economy is a subset within the larger circle of earth and its ecosystems and must operate in harmony with it.

It is sad to see this narrow politicized view of economics in The Oxford Handbook of Evangelical Theology spread worldwide as evangelical economics. Many Christians in other lands of course, and even in the U.S. and U.K., know better.

We need to move from “evangelical economics” or this sort to biblical ecological economics, which relativizes all classic and neo-classic theories and offers hope.