Bearing the Cross vs. Strapping on a Suicide Vest - Seedbed
close
Menu

15 Aware of this, Jesus withdrew from that place. A large crowd followed him, and he healed all who were ill. 16 He warned them not to tell others about him. 17 This was to fulfill what was spoken through the prophet Isaiah:

18 “Here is my servant whom I have chosen,
the one I love, in whom I delight;
I will put my Spirit on him,
and he will proclaim justice to the nations.
19 He will not quarrel or cry out;
no one will hear his voice in the streets.
20 A bruised reed he will not break,
and a smoldering wick he will not snuff out,
till he has brought justice through to victory.
21     In his name the nations will put their hope.”

Justice is a particular outcome but the big question is how justice is brought about. What is the nature of justice. This is where the divergence happens. In the wake of a crime, the people who have been injured and those who identify with them demand justice. Someone must pay. People regularly gather on the steps of the Supreme Court of the United States to cry out for justice. We call them protesters. In most cases they are protesting some kind of injustice and are crying out for the wrong to be righted by the court’s decision.

More often than not, the people crying out for justice have been hurt to one degree or another. Understandably, they are often angry, and rightfully so. Often they want vengeance. They want the “system” to be fixed. They want the wrongs to be atoned for. And here’s the big question. How will injustice be atoned for? Justifiable anger, understandable hatred, and even righteous indignation have a way of going after justice that often defies the character of justice.

So what is the nature and character of true justice? Is it anger or hatred or retribution? It has to be love—holy love. This is why the justice of God in Jesus Christ is so distinctive and even astonishing. It is self sacrificial love. (As an interesting aside, consider how a suicide bomber is just the opposite—self sacrificial hatred). Matthew echoes Isaiah in declaring the distinctive character of the justice of God in Jesus Messiah:

He will not quarrel or cry out;
no one will hear his voice in the streets.
20 A bruised reed he will not break,
and a smoldering wick he will not snuff out,
till he has brought justice through to victory.
21     In his name the nations will put their hope.”

Jesus went about the justice of God in a most surprising fashion. He inserted himself between the sinful hatred of the human race and the holy love of a righteous and just God.

I’m going to walk out onto some thin ice with my next inquiry. And it is inquiry rather than assertion. What if it was not the justice of God that killed Jesus? What if it was the misguided angry justice of our human race that crucified him? What if, in a strange twist of divine irony, God took that horrific sacrifice of his only son and made it into the eternal manifestation of the mercy of God—the self-same lamb who was slain from before the foundation of the world who reigns eternally at the center of the cosmos on the throne of God—forever and ever. It raises the stakes even higher on his instruction to us that he desires mercy not sacrifice.

And what if it was actually the justice of God that raised him from the dead? I don’t want to start an argument over atonement theory as much as I want to enlarge the conversation about the nature of the justice of God, the quality of the mercy of God and how these unfathomable realties find perfect union as the ultimate expression of the holy love of God. 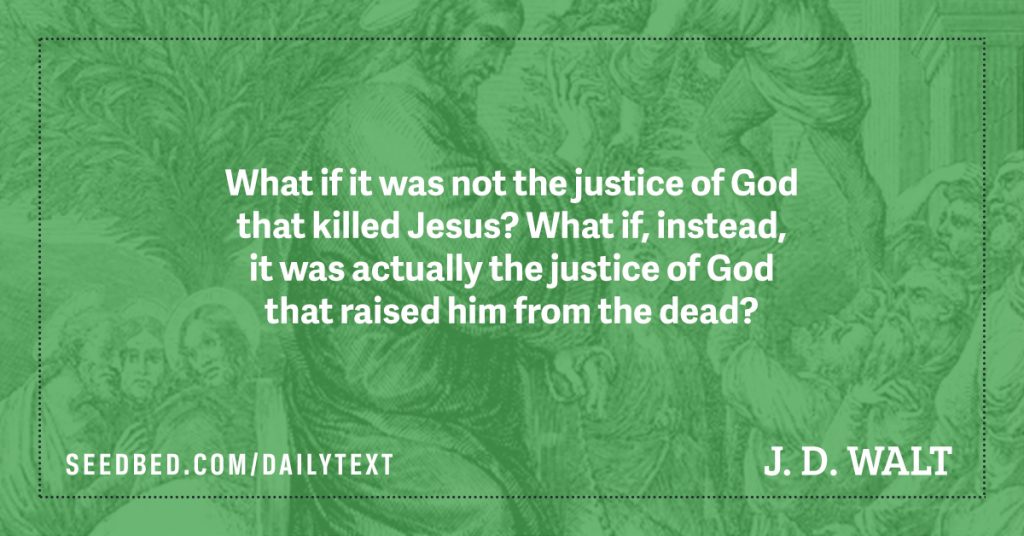 1. How do you describe the different ways people go about seeking justice in the world as compared with the justice of God?

2.  Think through the various protest movements working in the world today and examine how they go about their quest for justice. How do you think Jesus would critique these movements?

3. Look up Micah 6:8 and think through this text in comparison with the Isaiah text in today’s reading. How do you see these texts manifest and fulfilled in Jesus?