Beware of the NIDS and the SIDS - Seedbed
close
Menu

22 Then they brought him a demon-possessed man who was blind and mute, and Jesus healed him, so that he could both talk and see. 23 All the people were astonished and said, “Could this be the Son of David?”

24 But when the Pharisees heard this, they said, “It is only by Beelzebul, the prince of demons, that this fellow drives out demons.”

Have you ever been involved in an organization, family or church that was divided against itself? It usually involves at least two factions who are diametrically opposed on some controversy, neither of which will budge from their position. It’s called a “house divided,” and unless something can be worked out the house is destined to fall apart.

Some years ago I had my first real taste of a “divided house.” Both sides believed they were right. I found myself on the side who had both conviction and resolve yet there was also significant restraint and even a willingness on the part of some to reverse course based on how things unfolded. The other side dug in their heels with a fiercely unyielding posture and an unswerving certainty of their rightness in the matter. I will always remember what John, a close friend of mine told me in the midst of the conflict. He said, “Beware of the ‘Nids’ and the ‘Sids.'” I had no idea what he meant. When I inquired, he explained, “The ‘Nids” are people who are never in doubt, and the ‘Sids’ are those who are seldom in doubt.”

I think this is the problem with the Pharisees. They are Nids and Sids. They hold such a certainty in their rightness that their position takes on a poisonous kind of toxicity toward those who oppose them. They will stop at nothing to win.

In today’s text Jesus has just done an extraordinary thing. They brought him a person who was 1. Demon possessed. 2. Blind. And 3. Mute. Jesus completely healed him. Now look at the responses.

First the people: All the people were astonished and said, “Could this be the Son of David?”

Now look at the contrasting response of the Pharisees: “It is only by Beelzebul, the prince of demons, that this fellow drives out demons.”

Same extraordinary miracle. Two diametrically opposite responses. Note the differences. “Could this be?” vs. “It is only!” Who are the NIDS here? Now watch the response of Jesus: But if it is by the Spirit of God that I drive out demons, then the kingdom of God has come upon you. Note the humility in Jesus approach here. While I am sure Jesus has no doubt about who he is and by what authority and power he is working, I find it interesting that he uses the term, “if.” Jesus outwardly projects the deep inward humility which is one of the keystone hallmarks of the character of God.

In the end being a Nid or a Sid really has nothing to do with the position one takes in a matter and everything to do with the way this position is held and advanced. There’s a way of being right that is completely wrong. One can have surety without arrogance. At the same time one can be humble without being tentative. We must learn to hold our deepest convictions with an even deeper humility. It’s not about holding our convictions lightly but holding them humbly. This is who we are becoming if we participate with Jesus way of discipleship. 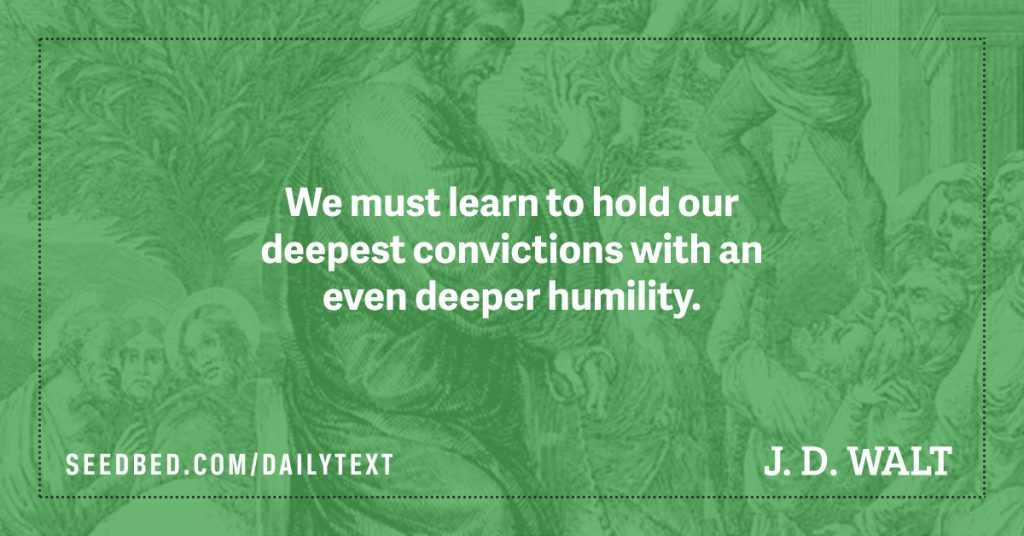 1. We live in the midst of many millions of people who are living with a “Could this be” posture as relates to Jesus. What would it mean for us to be humble in our approach to them?

2. How do you relate to this idea of “Beware of the NIDS and the SIDS?” Know any of these people? Ever been one? Being a NID or a SID is far more about posture than it is about a particular position. Do you grasp that?

3. How do  you hold your convictions? How do you see the difference between holding them humbly without holding them lightly or tentatively?