Is the Bible Relevant for My Life? It's the Wrong Question - Seedbed
close
Menu 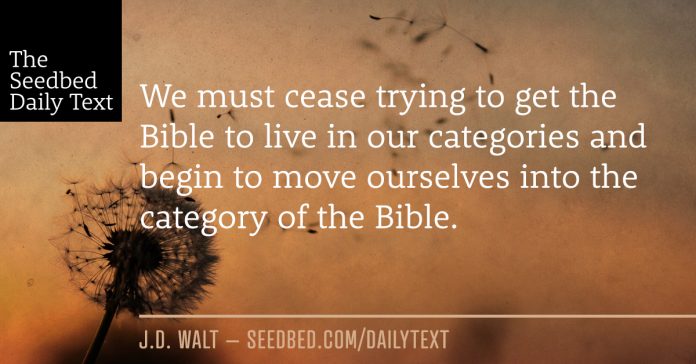 Standing up, Paul motioned with his hand and said: “Fellow Israelites and you Gentiles who worship God, listen to me! The God of the people of Israel chose our ancestors; he made the people prosper during their stay in Egypt; with mighty power he led them out of that country; for about forty years he endured their conduct in the wilderness; and he overthrew seven nations in Canaan, giving their land to his people as their inheritance. All this took about 450 years.“After this, God gave them judges until the time of Samuel the prophet. Then the people asked for a king, and he gave them Saul son of Kish, of the tribe of Benjamin, who ruled forty years. After removing Saul, he made David their king. God testified concerning him: ‘I have found David son of Jesse, a man after my own heart; he will do everything I want him to do.’“From this man’s descendants God has brought to Israel the Savior Jesus, as he promised. Before the coming of Jesus, John preached repentance and baptism to all the people of Israel. As John was completing his work, he said: ‘Who do you suppose I am? I am not the one you are looking for. But there is one coming after me whose sandals I am not worthy to untie.’

I’ve made the point here before, but today’s text insists that I make it again.

As Paul rises up to address the people he begins by commanding their attention. They must listen not because of Paul’s authority or stature but because of the authority of the message he is about to proclaim. He proceeds to preach the gospel, but note how he does it. He does not give them a set of principles or propositions or logical processes. He tells them the story.

In this instance he begins with Egypt and Moses and then Canaan and the Judges up to Samuel the prophet. He goes on to the monarchy of Saul and David and then he makes a bee line to Jesus. Why not Abraham or Isaiah or Jeremiah or Ruth? I don’t know.

Here’s what I do know and what I want to reiterate. For Paul, the story is about God. The human actors play key roles but they are interchangeable. The story is not about them. If you want to know who the story is about, see who gets the verbs. For effect I will give you the highlight reel of the action (i.e. verbs) in today’s text.

God CHOSE our ancestors. God MADE them prosper. God LED them out of the country. God ENDURED their conduct in the wilderness for forty years. God OVERTHREW seven nations in Canaan. God GAVE the land to his people. God GAVE them Judges. God GAVE them Saul. God REMOVED Saul. God MADE David their King. God TESTIFIED concerning him. God BROUGHT to Israel the Savior Jesus.

If I’m honest, when I tell the biblical story I tend to make it a lot more about the people in the Bible and the people to who I’m speaking. Sure, it’s about God, but I’m not so sure God is at the center of my storytelling. This has huge implications.

Peter and Paul and Mary (couldn’t resist!) and the cast of characters reveal to us over and over again what it looks like to be a people of one book. It probably does not occur to Paul that he tells the story in such a God-centered way. This is who he has become. Becoming a person of one book begins with a massive shift in our frame of reference. The Bible is for us but it is not about us. We are not at the center of it all. God as Father, Son, and Holy Spirit claim the center, exclusively. We must move from our self-referenced way of reading and our insistence that the Bible must somehow be made “relevant” for our lives. We begin not with our lives, but with the Word of God’s relevance. It is a given. No book is more central to life than this one.

The reason serious Bible study is such an optional and extracurricular activity in today’s church is because we think the bible is primarily about people and self-improvement and life enhancement—just like so many other books, really. People read the Bible and stop because they say they aren’t “getting anything out of it.” Our fundamental question about the Bible must change from, “What do we get out of it?”  to “How can we get into it?”

The Bible lives in a category of its own. We must cease trying to get the Bible to live in our categories and begin to move ourselves into the category of the Bible.

Do you need a new frame of reference for your approach to the Bible? Are you becoming a person of this most important book in the history of the world?