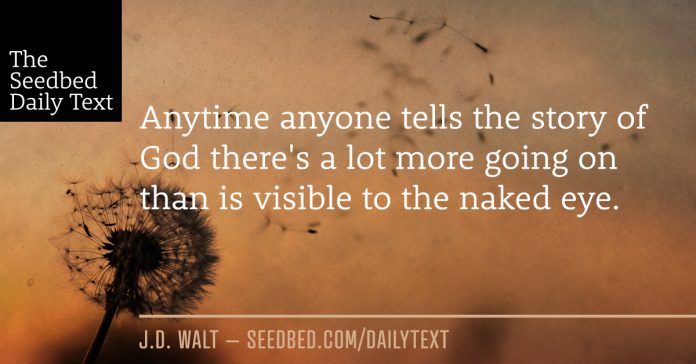 “As the time drew near for God to fulfill his promise to Abraham, the number of our people in Egypt had greatly increased. Then ‘a new king, to whom Joseph meant nothing, came to power in Egypt.’He dealt treacherously with our people and oppressed our ancestors by forcing them to throw out their newborn babies so that they would die.“At that time Moses was born, and he was no ordinary child. For three months he was cared for by his family. When he was placed outside, Pharaoh’s daughter took him and brought him up as her own son. Moses was educated in all the wisdom of the Egyptians and was powerful in speech and action.“When Moses was forty years old, he decided to visit his own people, the Israelites. He saw one of them being mistreated by an Egyptian, so he went to his defense and avenged him by killing the Egyptian. Moses thought that his own people would realize that God was using him to rescue them, but they did not. The next day Moses came upon two Israelites who were fighting. He tried to reconcile them by saying, ‘Men, you are brothers; why do you want to hurt each other?’“But the man who was mistreating the other pushed Moses aside and said, ‘Who made you ruler and judge over us? Are you thinking of killing me as you killed the Egyptian yesterday?’ When Moses heard this, he fled to Midian, where he settled as a foreigner and had two sons.

[Previously on Acts. . . Stephen, one of the appointed caretakers of Jerusalem’s widows, was engaged in extra curricular activities of performing miracles and preaching the gospel, which drew the ire of the religious authorities. With trumped-up charges they brought him before the Sanhedrin to stand trial. In response to the charges, rather than defending himself, Stephen made a counter-intuitive move: He begins telling them their own story.]

But there’s more going on here than that. Anytime anyone tells the story of God there’s a lot more going on than is visible to the naked eye. First and foremost, let’s remember something about Stephen. Here is a person who by all accounts is “full of the Holy Spirit and wisdom.” What does a person like that do in a situation like this?

Stephen tells the story as an act of public worship. This is not some obligatory liturgical act (as our public storytelling in church so often feels like). No, Stephen, rises up as nothing more or less than a worship leader, bearing witness to the mighty works of God in the power of the Holy Spirit. Stephen shows us what it looks like when a worship leader publicly engages in spiritual warfare.

While Stephen’s accusers stare him down with vilified hatred, he looks past them to see the real enemy: the powers, principalities, rulers and authorities of the present evil age. In the presence of the Sanhedrin, Stephen preaches the gospel to the invisible powers who source their sinister plot.

The worship of God is always public. It can take place at any time in any place. It always involves a bigger picture than what can be seen with the naked eye. Worship always takes on the powers of darkness. Jesus always wins. And yes, on occasion it will get you killed. The good news is you won’t stay dead.

Looking ahead just a bit, remember who Stephen sees standing in the heavens as this episode comes to a close? Yes, that would be the Lord Jesus Christ at the right hand of God. Look back now to the last verse of the previous chapter. Remember what the Sanhedrin witnessed in Stephen? I’ll reprint the text here for effect:

All who were sitting in the Sanhedrin looked intently at Stephen, and they saw that his face was like the face of an angel. (Acts 6:15)

Yes, there’s far more going on here than is visible to the naked eye. There always is.

Have you ever thought of biblical storytelling as an act of spiritual warfare? Ever tried it?