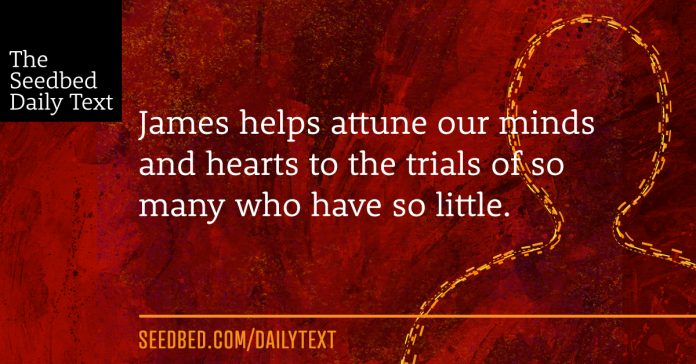 9 Believers in humble circumstances ought to take pride in their high position. 10 But the rich should take pride in their humiliation—since they will pass away like a wild flower. 11 For the sun rises with scorching heat and withers the plant; its blossom falls and its beauty is destroyed. In the same way, the rich will fade away even while they go about their business.

12 Blessed is the one who perseveres under trial because, having stood the test, that person will receive the crown of life that the Lord has promised to those who love him.

As we proceed with James it behooves me to say a few words about context. James, like the rest of the books in the bible was written to a particular group of people dealing with specific real world problems at a defined time in history. One of the golden rules of interpreting the Bible we must never forget is this one: It still means today what it meant to its original hearers. Scripture cannot mean whatever we want it to mean. At the same time, the bible cannot be limited to a first-century application.

I think of it like a circular target with a bullseye in the center and concentric surrounding rings. The bullseye would be the particular first century meaning and application. The outer rings would signify a range of acceptable applications throughout the history of the church and to the present day. Outside of the target itself are the range of meanings and applications that cannot be legitimately supported by the text.

Today’s text illustrates this well. In v.12 James revisits the issue of trials and perseverance again as he did in vv. 2-4. A good question to ask of the text would be, “To which kinds of tests and trials is James referring?” Let’s say I am literally on trial for a crime for which I am admittedly guilty. Is this the kind of trial James means? In order to determine this, our next question to James might be, “What did you mean when you wrote this, James? He tells us through the context. Vv.9-11 gives us a big clue. James is dealing with Christians who face economic oppression and are being treated unjustly—to the point of humiliation—by the rich. This theme is not new to the bible. Remember Isaiah? How about Amos?

Back to my “trial;” does it qualify as one of the kinds of trials I can consider as “pure joy?” Perhaps the law I broke is an unjust law and one designed to favor the rich at the cost of the poor. That would complicate things. For example’s sake, let’s just posit that my crime was garden variety theft. I have knowingly violated one of the Ten Commandments—stealing— and am in the process of willfully violating another one—bearing false witness. I think this trial misses the target entirely. I am merely facing the consequences of my sinful actions.

Twisting the plot a bit, let’s say I didn’t do the crime but have been unjustly accused. I can’t afford a lawyer and am being prosecuted by my landlord in order to evict me from my home on the grounds that I violated the terms of the lease by committing the crime—and all of this because he wants to raise the rent and attract a more economically advantaged tenant. All of a sudden, we have a trial that not only qualifies for James but seems to hit the bullseye of the target.

Let’s try another example. On your way to deliver food to a few shut-ins, you get hit from behind by a semi which totals your vehicle and puts you in the hospital with permanently debilitating but non life threatening injuries. Is this outside of the realm of the tests and trials James refers to? It does not involve economic injustice. At the same time, remember from v.2 James said, “trials of many kinds.” I would say this one misses the bullseye but hits the target and qualifies as a trial I must endure as a testing of my faith and which can be turned to my good through the persevering work of the Holy Spirit to bring me to completeness and maturity of faith.

Why does this matter? Chances are, if you are reading this, it may never have occurred to you that today’s text is all about the upending of the rich and the exaltation of the poor. Chances are, if you are anything like me, you read right over the original context and immediately ran to your own tests and trials, which in all likelihood, qualify for the category of “first world problems” (i.e. challenges not even remotely in the realm of the biblical meaning; e.g. your third ‘riverfront’ home was destroyed by flooding. But look on the bright side, the flood also cleared the shoreline of all those uninsured shacks inhabited by the “riffraff” you wanted out of there anyway.)

Are you feeling the jarring disorientation of all this? That’s what James is after. It’s not so much about my son being on academic probation at college this semester as it is about the millions of orphans around the world who won’t be able to go to first grade this year.

While we cannot help but read James as “the rich” (relatively speaking), James insists that we read it with “the poor.”

God our Father, open my eyes to understand the difference between a real trial and an inconvenience. Attune my mind and heart to the trials of so many who have so little. Open my eyes to my relative wealth in this world and attune me to the reality of the poverty all around me. In Jesus name, Amen.

1. What, if anything, upsets you about today’s Daily Text entry? Why does it upset you? Why doesn’t it?

2. What tests and trials in your life seem to land in the target James has in mind? Which ones might not?

3. What about fellow believers who are facing economic injustice or oppression? Are they reaping what they have sown? Or could their disadvantaged situation be beyond their cause or control? What response might we make to them?