The Most Blasphemous Crime in the Church Today - Seedbed
close
Menu 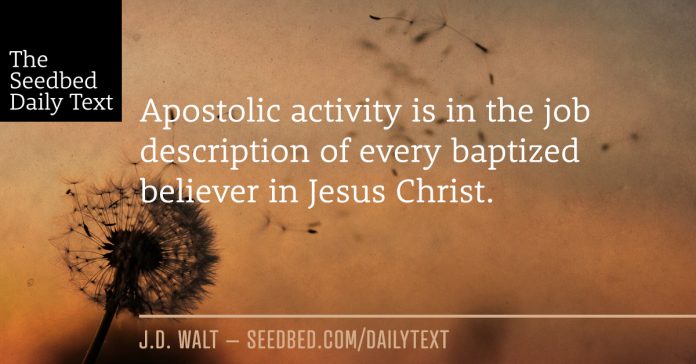 Now for some time a man named Simon had practiced sorcery in the city and amazed all the people of Samaria. He boasted that he was someone great, and all the people, both high and low, gave him their attention and exclaimed, “This man is rightly called the Great Power of God.” They followed him because he had amazed them for a long time with his sorcery. But when they believed Philip as he proclaimed the good news of the kingdom of God and the name of Jesus Christ, they were baptized,both men and women. Simon himself believed and was baptized. And he followed Philip everywhere, astonished by the great signs and miracles he saw.

When the apostles in Jerusalem heard that Samaria had accepted the word of God, they sent Peter and John to Samaria. When they arrived, they prayed for the new believers there that they might receive the Holy Spirit, because the Holy Spirit had not yet come on any of them; they had simply been baptized in the name of the Lord Jesus. Then Peter and John placed their hands on them, and they received the Holy Spirit.

Remember what Jesus told his disciples, a.k.a. Apostles, at his Ascension into Heaven? For precision’s sake, let’s restate it here:

But you will receive power when the Holy Spirit comes on you; and you will be my witnesses in Jerusalem, and in all Judea and Samaria, and to the ends of the earth. (Acts 1:8)

He gave the Apostles a truly apostolic mission. And what is an apostolic mission, or an Apostle? An Apostle takes the gospel across a boundary or border it has never crossed before and into a new territory. But this raises a huge question for me. Why are the Senior Pastors—oops!—I mean Apostles hiding in Jerusalem and leaving the apostolic work for everyone else? Who first took the gospel to Samaria? Peter? No! It was the widow-serving wonder-working Philip.

So rather than speculate further on what these Apostles were or were not doing back at the ranch in Jerusalem, permit me to once again state the obvious. You don’t have to be an Apostle to do apostolic work. In fact, it looks like the first real border-crossing apostles weren’t actually the Apostles. They were widow workers. Let that sink in.

From the very first days of the Church, the Holy Spirit works as an equal opportunity employer. “Anyone can” and “everyone must” get in on the action. In other words, apostolic activity is in the job description of every baptized believer in Jesus Christ. We have lived through an age where the Church got it exactly backwards—where only the “paid professionals” were authorized to do the big stuff.

The time has come again for every baptized Christian to seek the Holy Spirit for some good, old-fashioned apostolic imagination. What new territory, from a person to a province, a neighborhood to a nation, might the gospel break into through your life? No one needs to authorize you for apostolic work. You have apostolic authority. Go for it! It must become a blasphemous crime in today’s church for anyone to utter the tepid words, “But I’m just a layperson.”

A final word for church planting teams. Stop talking about getting your DNA right. The Holy Spirit is your DNA. Explore the earth-moving implications of that statement. One does not establish their own DNA. It is established for them. If you want to get a grasp of the basic genetic code, Acts 1:8 is a good starting place. Next take a look at John 15 and Philippians 2.

Are you coming to grips with the authority the Holy Spirit gives you to be an apostolic agent in the world? Or are you still asleep to this reality?