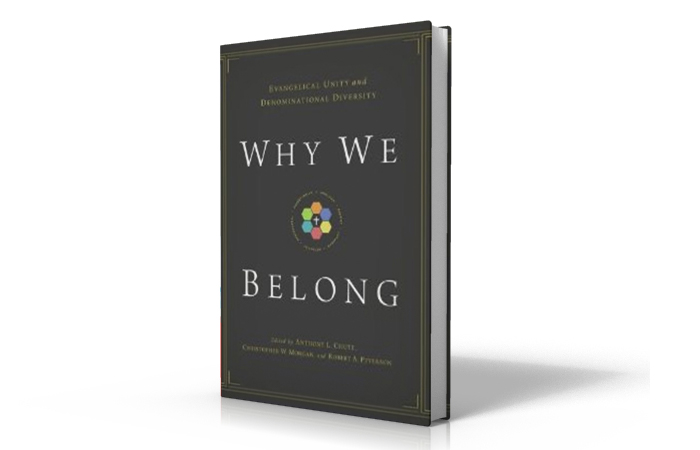 Evangelicals unite around an unwavering commitment to the authority of Scripture, the redemptive work of Jesus Christ, the importance of a personal relationship with God through Christ, and the urgency of spreading the gospel through evangelism and discipleship. However, many evangelicals align with a particular denomination based on historical, theological, or personal reasons. Is it possible to firmly hold to the core doctrines of evangelicalism and embrace the historical richness that comes with denominational affiliation? For the editors and contributors of Why We Belong, the answer is an overwhelming “yes.”

In Why We Belong, several Christian leaders across the denominational spectrum describe why they are evangelical and embrace a particular tradition. Many of these leaders share their personal histories with us, describing their journeys toward or upbringing in a particular tradition while maintaining their evangelical convictions. They mourn that many in their traditions have embraced theological liberalism, disregarding the orthodoxy that once characterized their traditions. While this is the unfortunate case, they are committed to an evangelical revival of their denominations, through the recovery of historic Christian doctrine and the transforming power of the Holy Spirit.

While each chapter is worth a slow and careful read, here is a summary of why each of these contributors consider themselves both evangelical and denominational:

Gerald Bray writes that while Anglicanism is difficult to define (due to an ecclesiastical lineage unlike any other denomination), Anglicans traditionally share a common commitment to the authority of Scripture and the creeds, ecumenical relations with Rome and Constantinople,  a willingness to learn from other traditions, cultural engagement, and an emphasis on the core doctrines of historic Christianity. For Bray, while Anglicanism has fallen prey to numerous controversies and schisms, these core commitments of Anglicanism are essentially evangelical. Bray identifies C.S. Lewis and John Stott as exemplars of true Anglicanism.

Timothy George, using his mad historical theology skills, argues that while evangelicalism is a renewal movement of historic Christianity, the Baptist tradition represents a “renewal within the renewal” (102). Baptists can claim a Reformation heritage, but are unlike any other religious grouping in existence from a socio-historical standpoint. According to George, “For Baptists, the great doctrines of the Reformation were refracted through the prism of the persecution and dissent that informed their intense advocacy of religious liberty…” (107). Baptists claim loyalty not to a particular figure or denomination, but rather only to Jesus Christ. George indicates that while other denominational traditions have enriched his life, being Baptist gives him the freedom to appropriate “the gifts that they offer” without rejecting the Baptist principles he holds dearly (109).

Douglas Sweeney writes that he is Lutheran because of the tradition’s “stress upon God’s real, objective, reliable, durable presence in the world–and availability to us–most importantly in the personal of Christ, the Bible, and sacraments” (119). Sweeney resonates with the Lutheran emphasis on incarnational living, the use of the arts in Christian worship, and an unwavering commitment to the Bible as “the most important form of God’s presence in the world” (121). Sweeney cites Luther for clearly magnifying the good news that God has come to us in Christ, and rescues us from “sin and self-absorption” (129).  He closes his chapter by writing that being Lutheran is not enough, but neither is being evangelical, as many Lutheran churches are “sick,” and evangelicals depend on older church traditions for theological substance. In sum, evangelicals must trust in the “real presence of Christ in Scripture and the sacraments,” cling to God’s grace, and maintain a grace-filled lifestyle in “true devotion and discipleship” (132).

Timothy Tennent embraces Methodism for numerous reasons, such as prevenient grace, the possibility of entire sanctification (which he clarifies in-depth for the utterly confused), sacramental theology, a missional spirit, emphasis on conversion, and the centrality of worship. Refreshingly, Tennent profusely cites John Wesley in his chapter, bringing clarity to many of Wesley’s ideas for those unfamiliar with the Wesleyan tradition. Tennent laments the decline of orthodoxy in Methodist churches today, and remains “far more identified with the common evangelical witness of all churches” than he does Methodism, despite his “deep love” for the tradition (150).

Byron Klaus, who identifies himself as Pentecostal as opposed to charismatic for historical and theological reasons, laments that the negative public perception of Pentecostals has been perpetuated by Pentecostals themselves. It was the so-called “Third Wave” of Spirit that propelled Pentecostalism to the ranks of mainstream evangelicalism (157). Klaus writes that Pentecostalism resonates well with David Bebbington’s four characteristics of evangelicalism (which receives attention throughout the entire volume). Pentecostalism and evangelicalism are both (1) conversionist, meaning that an encounter with the living God is central to both, (2) activist, indicating a commitment to missionary and social engagement, (3) biblicist, as in both firmly hold the Bible in a place of authority in matters of doctrine and practice, and (4) crucicentric, emphasizing the redemptive sacrifice of Jesus on the cross. Klaus argues that for evangelicals as a whole to “reach forward,” they must recommit themselves to these four convictions.

Bryan Chappell affirms Presbyterian emphases such as the doctrines of grace, seeking the glory of God in all things, possessing a “humble” hermeneutic, and a heart for the nations, but above all, clings to his evangelical convictions. He affirms a Presbyterian ecclesiology, including the role of elders in the local church, mutual accountability, a firmly biblical approach to worship, sacramental and covenant practices, and missions. For Chappell, Presbyterianism flows naturally from Scripture, and thus meshes well with his unabashed evangelical identity.

Helpfully, the editors include chapters on ecclesiastical history, evangelical theology, and the future of denominationalism. These chapters contextualize the main chapters and provide the reader a deeper understanding of the issues.

Amidst an evangelical subculture that entrenches itself into narrow tribes, this work provides a refreshing ecumenical dialogue that breaks traditional barriers while celebrating both evangelical unity and diversity. The contributors lament that denominations have drifted away from orthodoxy but nonetheless remain steadfast in their participation and ministry within their denomination. For these contributors, denominations provide us with rich understandings of our faith, hook us into a historic community of people, and provide support and encouragement through networks of churches. They provide structures for thriving in ministry practices and guidance in formulating transformative worship experiences. Evangelicals who dismiss denominationalism for the sake of non-identification or independence may find themselves persuaded that joining a denomination will enrich their ecclesial experience and perhaps transform their spiritual journey.

While this work is an incredible entry into further discussions related to evangelicals and church traditions, it could have been stronger in a few ways. First, the contributors are all white males who work in theological education. The book could have been richer had the editors included the voices of international scholars, women, and pastors. Second, since the contributors are all leaders in Christian higher education, the book is very academic, and can sometimes read like a lecture. Third, a chapter centered on the phenomenon of non-denominationalism would have introduced some needed pushback to the rather celebratory tone of the work. Can nondenominational evangelicals experience the same richness that those within denominations experience?

While a few concerns exist, Why We Belong is a homerun. Those who value rich interdenominational dialogue, the wisdom of seasoned scholars, and are committed to the future of not only evangelicalism but all of Christianity will find this work to be an exciting, engaging, and intellectually stimulating read.