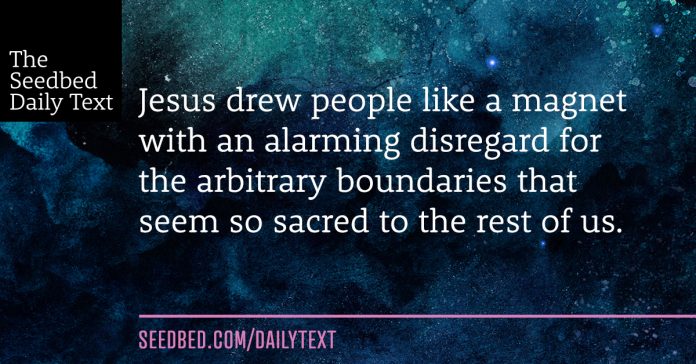 “In the time of King Herod, after Jesus was born in Bethlehem of Judea, wise men from the East came to Jerusalem, asking ‘Where is the child who has been born King of the Jews? For we observed his star at its rising, and have come to pay him homage.’ When King Herod heard this, he was frightened, and all Jerusalem with him; and calling together all the chief priests and scribes of the people, he inquired of them where the Messiah was to be born. They told him, ‘In Bethlehem of Judea; for so it has been written by the prophet: And you, Bethlehem, in the land of Judah, are by no means least among the rulers of Judah; for from you shall come a ruler who is to shepherd my people Israel.’”

The circumstances surrounding the birth of the Christ-Child have much to say about what kind of person he would be. Where he was born, and to whom, hint at the earthiness and humility of his future ministry. And what about the folks who were there to greet him? Jesus was welcomed into the world by shepherds and pagans. The facts surrounding these wise men, or magi, are murky at best. We are not told who they represented, nor are we informed as to the exact nature of their profession. We do know where they came from, and we do know what they came to do. They came from the East.

In the first century, nearly everything east of Jerusalem belonged to the Parthian Empire, within which a multitude of religions were tolerated. Whichever of these the wise men practiced, they were most certainly not Jews! Their religion was different. Their culture was different. Everything about them was different. Yet, they leave everything behind to enter into the presence of Jesus. They were compelled to pay him homage. As the narrative in Matthew 2 continues, we are told that the wise men returned to their home country, but that they did so by way of a different route. We are told that they did so to avoid another encounter with Herod. What is the deeper meaning of this? I perceive it as an indication that they returned to their native place, and even to their former practices, yet in a fundamentally altered state due to their encounter with the Messiah.

This story is not just a foretelling of things to come. What we have here is a full disclosure of Jesus’ DNA. This is who Jesus is, drawing people like a magnet with an alarming disregard for the arbitrary boundaries that seem so sacred to the rest of us. He didn’t care that they came from a distant land. He didn’t care that they brought cultural and religious baggage along with their gifts. I propose that these men weren’t just drawn westward by a distant star, but by the love that emanated from the heart of the newborn King. Before he had even learned to walk, he was already welcoming the stranger.

Creator God, through the work of Jesus, you invite everyone to the table. Cultivate within us a spirit of hospitality and a willingness to lose friends in our resolve to welcome the stranger.