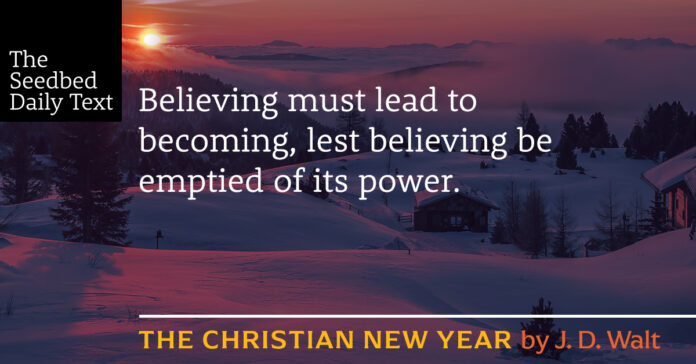 Merry Christmas Sowers! I will be taking a few days off from the Daily Text. Welcome Dr. Timothy Tennent (my boss) for the next few days with reflections from several celebratory Psalms fitting for the season. I’ll be back January 1 with a reprise of our most popular series ever: First Word. Last Word. God’s Word.—to take us through January—speaking of which I have a New Year’s Sowing Challenge with a REWARD for you to consider.

There was a man sent from God whose name was John. He came as a witness to testify concerning that light, so that through him all might believe. He himself was not the light; he came only as a witness to the light.

The true light that gives light to everyone was coming into the world. He was in the world, and though the world was made through him, the world did not recognize him. He came to that which was his own, but his own did not receive him. Yet to all who did receive him, to those who believed in his name, he gave the right to become children of God—children born not of natural descent, nor of human decision or a husband’s will, but born of God.

“Christmas is for children,” or, “Christmas brings out the child in us all.” Those are nice sentimental thoughts on one level, but might they hold a more serious truth? Could Christmas be for adults too?

On more than one occasion while teaching about his kingdom, Jesus lifted up a child and said things like, “Whoever wants to enter into the kingdom of heaven must become like a child” (e.g., Matt. 18:3; Mark 10:15; Luke 18:17). This has most often been interpreted in a sentimental fashion, lifting out the whimsical, wondrous, carefree nature of children as the prerequisite mentality for entering into God’s kingdom. While these are commendable qualities, and perhaps have a modicum of relevance to what Jesus was saying, the biblical evidence points to a different meaning. In the first century, children held no status or value in the community. Children were more like slaves in the sense of being the property of another with no status or social value of their own.

While this is far from the case for most children in our North American context, it remains the situation for millions of children around the world. Many of them find themselves as both status-less children and slaves. Jesus’ point was not to become carefree and whimsical, which would have been somewhat foreign concepts to a first-century child. He lifted up a child to reference his utter humility. In the eyes of the society, they brought nothing to the table of value; not even themselves. Here’s a rough translation: “Unless you become humble, like this child, coming to grips with the fact that you bring nothing to the table, no claim of entitlement, no rights (birthrights or otherwise), privileges, status or anything else; unless you humble yourself in this fashion, just like this child I hold up before you, and enter in on the very same level as anyone else, you can’t come in. It’s not because I am barring the door to hold you out. It’s because you are disqualifying yourselves from even the possibility of perceiving the reality of my kingdom to begin with.”

With this backdrop, hear the Christmas text again:

Yet to all who did receive him, to those who believed in his name, he gave the right to become children of God—­children born not of natural descent, nor of human decision or a husband’s will, but born of God.

It begins with believing, yet believing can be a deceptive word. We can believe in all we have read through and considered these past twenty-five days and still be no closer to the real miracle of Christmas. We can believe Jesus is the Son of God and even the Savior of the world in the same way we believe the sky is blue and gravity is real. The birth of Jesus on Christmas Day, his resurrection on Easter, and his certain return on an unknown future date can be eternal verities we run up the flagpole and salute and yet remain unaffected in our lives by their truth. Examine the text closer:

Yet to all who did receive him, to those who believed in his name, he gave the right to become children of God . . .

Believing must lead to becoming, lest believing be emptied of its power. The whole point of Advent—indeed, of the gospel—is that seeds of faith be sown in our minds and hearts such that something genuinely and stunningly new could break through the service and burst into life.

Track further with the text:

. . . children born not of natural descent, nor of human decision or a husband’s will, but born of God.

Though the language has become cliché and caricatured through the years, the Bible is clear about being “born again.” Jesus said it plainly, “Very truly I tell you, no one can see the kingdom of God unless they are born again” (John 3:3 NIV).

The anonymous hymn writer may have said it best:

Though Christ a thousand times

in Bethlehem be born,

if He’s not born in thee,

This is the invitation of Christmas: not passive belief but active becoming. It’s taking the risk of new birth. As gifts are given and received and the wrapping paper gathered up, the excitement of the day will recede. As the sentimentality of the day fades, the serious possibility remains: Will you humble yourself like a child? Will you receive, believe, and be born again and become humble before the God of heaven and earth, the Lord over all creation, Jesus Christ? What could be a better story than to say you were born again on Christmas Day?

Our Father in heaven, nearer than my breath, thank you for these days of Advent and this new year in Christ. I want to be born again. I want to believe in Jesus in a deeper way than before. I want to receive him into the depths of my being. Lord, Jesus, I want for you to be born in me in a new and deeper way. I don’t discount what has happened prior to this day in my walk with you. I only know it has led to this present moment where I want to say yes to you like never before. I want to become one of the children of God afresh. Come, Holy Spirit, and let the life of Jesus Christ be born anew and afresh in me today and lead forward in a way of growing up in him and into the life I was made for. In the name of Jesus Messiah—the one who came, is here, and is coming again—for his glory and our good, amen.

How will these days of Advent unfold now into the rest of this new year in Christ for you and your family? How will this year be different? Better? More challenging?