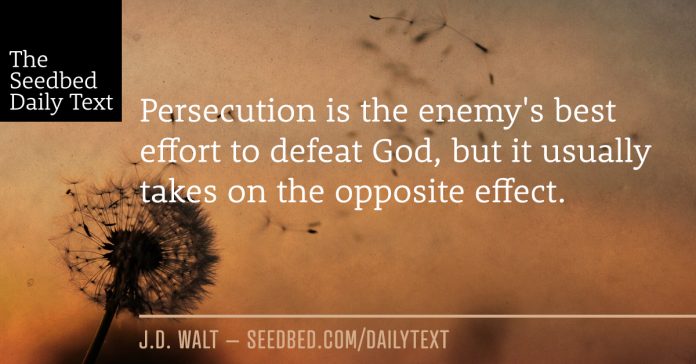 It was about this time that King Herod arrested some who belonged to the church, intending to persecute them. He had James, the brother of John, put to death with the sword. When he saw that this met with approval among the Jews, he proceeded to seize Peter also. This happened during the Festival of Unleavened Bread. After arresting him, he put him in prison, handing him over to be guarded by four squads of four soldiers each. Herod intended to bring him out for public trial after the Passover.So Peter was kept in prison, but the church was earnestly praying to God for him.

Can you fathom the blow this must have been to the Church? Herod has executed one of the Sons of Thunder! One of the Big Twelve. This is another of those cases where Luke, with a severe economy of speech, inestimably understates the situation. James, Disciple #2: slaughtered. And just when they thought it couldn’t get any worse, he had Disciple #1, Peter, arrested and jailed. To add insult to injury, he did it during the Passover.

They locked Peter up in a dungeon, and if that weren’t enough they posted four squads of four soldiers each to guard him. Do the math. That’s 16 armed guards. We will read tomorrow that Peter was actually chained to two of the guards at all time—even in his sleep. Keep in mind, no one had blown up any buildings or strapped on any suicide vests or set off any roadside bombs. This punishment came in response to their preaching, teaching and healing in the name of Jesus Christ. These were men of indefatigable peace and they were being treated like the most dangerous criminals on the face of the planet.

Are we grasping the gravity of this? In keeping with the post a few days back, I’m sure Peter was remembering the time when Jesus said this.

Clearly this level of incarceration is not in response to the threat of Peter. There’s only one way to explain it. This kind of persecution comes in response to the threat of the power of the gospel. Persecution rarely has anything to do with the people being persecuted and everything to do with the power of their God. Persecution is the enemy’s best effort to defeat God. I can imagine James, Son of Thunder, just prior to death by sword saying to Satan, “Is this all you’ve got?!”

The gospel is the unstoppable power of God, period.

It reminds me of my challenge to us a few weeks back. If we aren’t being persecuted in some form or fashion, maybe it’s because we aren’t really a threat.

Can you foresee a time when the gospel will once again be perceived as a threat to the prevailing culture and the powers that be?