Before You Call the Cops On Your Friends - Seedbed
close
Menu 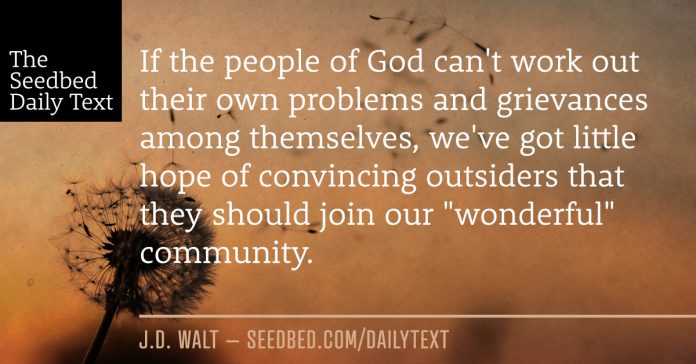 Five days later the high priest Ananias went down to Caesarea with some of the elders and a lawyer named Tertullus, and they brought their charges against Paul before the governor. When Paul was called in, Tertullus presented his case before Felix: “We have enjoyed a long period of peace under you, and your foresight has brought about reforms in this nation. Everywhere and in every way, most excellent Felix, we acknowledge this with profound gratitude. But in order not to weary you further, I would request that you be kind enough to hear us briefly.“We have found this man to be a troublemaker, stirring up riots among the Jews all over the world. He is a ringleader of the Nazarene sect and even tried to desecrate the temple; so we seized him. By examining him yourself you will be able to learn the truth about all these charges we are bringing against him.”The other Jews joined in the accusation, asserting that these things were true.

Despite the fact that I am a licensed attorney, I cannot claim knowledge of the legal system of the first century in the middle east. However, certain features strike me as familiar and tend to support the general population’s disdain for lawyers at all times and in all places.

For starters, Tertullus begins with a sleazy schmoozy-ness in an attempt to brown-nose the Judge (i.e. Your Awesomeness). Next he makes a series of sweeping charges and allegations, only he doesn’t present any evidence in support other than the “Amens” from the peanut gallery he brought with him from Jerusalem.

There’s a more distressing feature about these proceedings than my admitted nitpicking about lawyers. The most disturbing thing about this litigation is where it is taking place. Here we see a religious dispute among and between God’s chosen people taking place in the court system of Rome. I know, Paul pulled the citizenship lever that got it there, but he did so because of the stunning absence of even the slightest shred of civility among his accusers.

Here’s my question. Wouldn’t Tertullus have made a great mediator/arbitrator between the Jews and Paul? Couldn’t this have been resolved in a peaceful fashion? Imagine the way this kind of witness impacted all of the Roman officials involved in the proceedings, now up to about 500 men so far. All of this must have appeared quite ridiculous to them.

It’s impossible to sort out the ancient past along the lines of analysis I’m drawing here. And my application today is perhaps a stretch, but I do think there is a word of warning for the present day people of God.  If the people of God can’t work out their own problems and grievances among themselves, we’ve got little hope of convincing outsiders that they should join our “wonderful” community.

People of God, it’s worth considering these things the next time you think about calling the cops on your friends, or for that matter, your enemies.

What impacts and effects do you see from Christians airing out their grievances with one another in the courts? I know, sometimes it’s unavoidable.