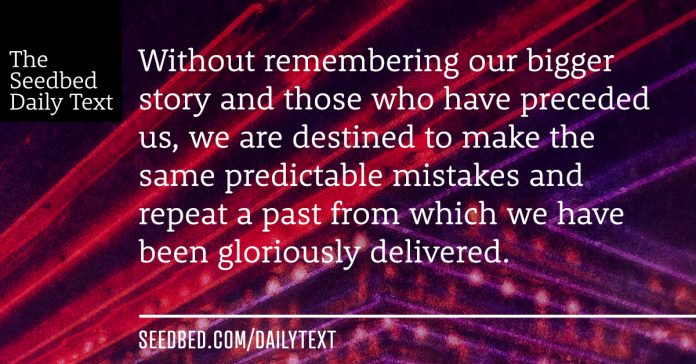 For I do not want you to be ignorant of the fact, brothers and sisters, that our ancestors were all under the cloud and that they all passed through the sea. They were all baptized into Moses in the cloud and in the sea. They all ate the same spiritual food and drank the same spiritual drink; for they drank from the spiritual rock that accompanied them, and that rock was Christ. Nevertheless, God was not pleased with most of them; their bodies were scattered in the wilderness.

These things happened to them as examples and were written down as warnings for us, on whom the culmination of the ages has come. So, if you think you are standing firm, be careful that you don’t fall! No temptation has overtaken you except what is common to mankind. And God is faithful; he will not let you be tempted beyond what you can bear. But when you are tempted, he will also provide a way out so that you can endure it.

These things happened to them as examples and were written down as warnings for us, on whom the culmination of the ages has come.

So don’t tell me, “God will make a way when there seems to be no way.” Tell me the story where God made a way when there was no way. Tell me the against-all-odds story of Moses and the Red Sea. I need the textured grit of the whole true story in order to understand my own situation in twenty-first-century Corinthian America. We aren’t the first generation to deal with insurmountable odds and overwhelming temptation. Without remembering our bigger story and those who have preceded us and the God who goes ahead of us and comes behind us and literally hems us in—we are destined to make the same predictable mistakes and repeat a past from which we have been gloriously delivered.

Go back now and reread today’s text and examine all the assumptions Paul makes about his hearers knowing the story he is telling. I’m going to make a recommendation below that can help us.

Our Father in heaven, hallowed be your name. Your kingdom come. Your will be done, on earth as it is in heaven. Thank you for the treasure of your Word, which tells us our story in exquisite detail. Increase my appetite to know this story, inside out and upside down. Though I have learned so much, my understanding remains far too thin. Come, Holy Spirit, and help me become a person of one book. In Jesus’ name, amen.

THE RECOMMENDATION: One of my core commitments as Seedbed’s sower-in-chief is helping the people of God to embrace the story of God as revealed in the Bible. We are making good progress, but have a long way to go. I would love it if you would check out the “so-far” here to see how these resources might serve your ongoing discipleship. In light of today’s entry, check out The Epic of Eden with Sandra Richter. You can watch the first session on the house here.