What Do Castor and Pollux Have to Do with Anything? - Seedbed
close
Menu 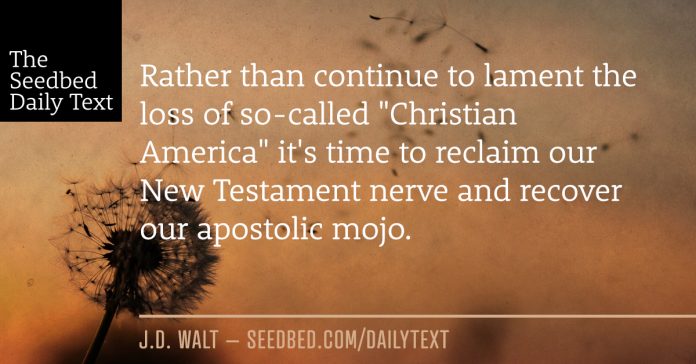 After three months we put out to sea in a ship that had wintered in the island—it was an Alexandrian ship with the figurehead of the twin gods Castor and Pollux. We put in at Syracuse and stayed there three days. From there we set sail and arrived at Rhegium. The next day the south wind came up, and on the following day we reached Puteoli. There we found some brothers and sisters who invited us to spend a week with them.

Why did Luke decide to tell us about the twin gods, Castor and Pollux? Is it an insignificant detail or an apostolic clue?

Growing up in the small town of Dumas, Arkansas, I knew a different world than the one I inhabit today. We thought diversity of religion consisted of the Baptists, the Methodists and the Assembly of God. There were a few Jewish families, but so few they had to go to another town to find a synagogue. That was it. The church was really the only show in town.

The immortal words of Dorothy seem appropriate to insert here, “ToTo, I’ve a feeling we’re not in Kansas anymore.”

Every morning as I drive my children to school we pass by a massive white marble temple and standing tall on the steeple is a golden statue of Moroni, the angelic mascot of the Mormon Church. In forty years, the religious landscape has dramatically changed before our very eyes. World religions are no longer somewhere out there in the world. They are all around us.

We find ourselves living again in the age of Castor and Pollux. The rationalism of the enlightenment is giving way to a more spiritually oriented world view. The downside? There are myriad ways for people to be misled by false teaching and enslaved to false gods. The upside? The mission of the gospel is most at home in this kind of environment. We find ourselves living in a period of history that has far more in common with the world of the bible than the world I grew up in.

The stage is being set for another great awakening. Rather than continue to lament the loss of so-called “Christian America” it’s time to reclaim our New Testament nerve and recover our apostolic mojo. It’s going to require massive shifts in the way we understand ourselves as the followers of Jesus and our role as the Church in the world. We no longer function as the benign chaplains of city hall. We’re no longer leading prayer under the lights of Friday night football games. We occupy a far more humble place in culture, yet we hold far greater possibilities of demonstrating and heralding the in-breaking Kingdom of God.

We are back in the world of Castor and Pollux. It’s a world increasingly inhospitable and even hostile to the church as we have known it. At the same time the culture will become far more receptive to the gospel of Jesus Christ.

Will we go with the gospel or choose the predictable pathways of the past? It remains to be seen.

Do you tend to be threatened by the onslaught of so many other religions and gods popping up across the landscape around us, or do you see new opportunities for the gospel? Or do you to tend to think they are all basically pointing to the same basic God and, “To each their own”?

© Seedbed 2021
What Do Castor and Pollux Have to Do with Anything?
MORE STORIES