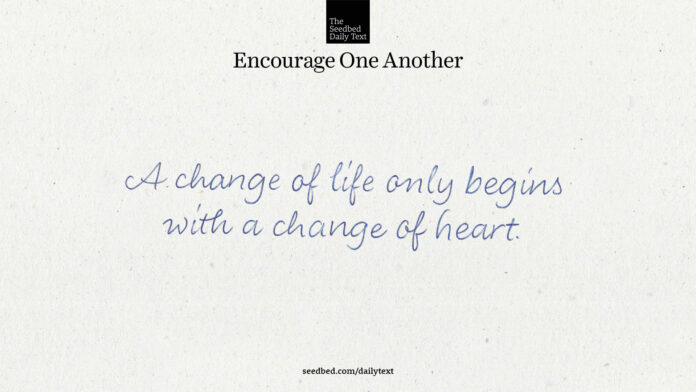 24 So Gideon built an altar to the Lord there and called it The Lord Is Peace. To this day it stands in Ophrah of the Abiezrites.

If we might draw a word of encouragement from the story of Gideon thus far it would be this:

God chooses the unlikely to accomplish the impossible.

If we were to draw a second word of encouragement from today’s text it would be this one:

A change of life only begins with a change of heart.

It would seem that taking on one’s oppressor enemies would begin with a battle plan against them, the building of an army, and the development of some new battle strategy. In God’s Kingdom, deliverance from enemies does not begin on the battlefield but in the heart. It does not begin by changing what is outside but what is inside.

The first step for Gideon to lead the people to deliverance from the Midianites was not an act of war but an act of worship. Gideon had to bring his own life from its own divided loyalties to the place of the undivided heart.

24 So Gideon built an altar to the Lord there and called it The Lord Is Peace. To this day it stands in Ophrah of the Abiezrites.

Gideon made peace with God. Gideon made the shift from believing in God to believing God. It would take some more reassurances, but here is where he crossed over.

So may I ask you the question? Have you crossed over? Have you moved from the passive place of believing in God and into the active faith of believing God?

Father, I know my heart is divided. At least I know it is not completely whole. I want to be whole-heartedly and undividedly yours. Jesus, I belong to you. So I pray in the Spirit with the Psalmist for you to search me and know my heart. Test me and know my anxious thoughts. See if there is any offensive way in me, and lead me in the way everlasting. In Jesus name, Amen.

What divides your heart? Do you aspire to whole-heartedness? Are you willing to cast aside any and all other allegiances but to God alone?

Ok Preachers and Pastors and Candlestick makers in our midst—If you haven’t gotten your plans for Advent together yet, I’ve got a deal for you. Check it out here.