How the Christian Faith Becomes Something More
close
Menu 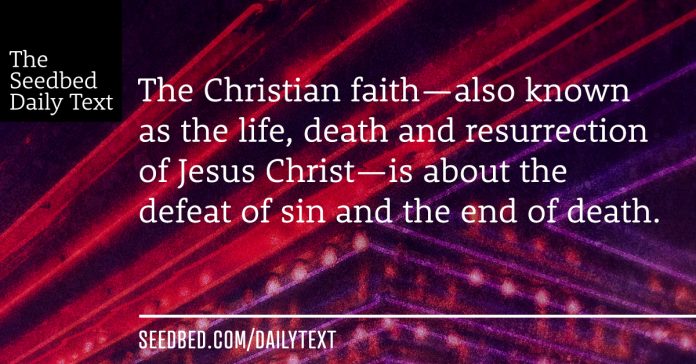 Now if there is no resurrection, what will those do who are baptized for the dead? If the dead are not raised at all, why are people baptized for them? And as for us, why do we endanger ourselves every hour? I face death every day—yes, just as surely as I boast about you in Christ Jesus our Lord. If I fought wild beasts in Ephesus with no more than human hopes, what have I gained? If the dead are not raised,

“Let us eat and drink,
for tomorrow we die.”

Do not be misled: “Bad company corrupts good character.” Come back to your senses as you ought, and stop sinning; for there are some who are ignorant of God—I say this to your shame.

But someone will ask, “How are the dead raised? With what kind of body will they come?” How foolish! What you sow does not come to life unless it dies. When you sow, you do not plant the body that will be, but just a seed, perhaps of wheat or of something else. But God gives it a body as he has determined, and to each kind of seed he gives its own body. Not all flesh is the same: People have one kind of flesh, animals have another, birds another and fish another. There are also heavenly bodies and there are earthly bodies; but the splendor of the heavenly bodies is one kind, and the splendor of the earthly bodies is another. The sun has one kind of splendor, the moon another and the stars another; and star differs from star in splendor.

The death and resurrection of Jesus Christ has been interpreted to mean many things through the centuries when in reality it means only two things: the defeat of sin and the end of death. This alone is what motivated the apostle Paul to say things like this:

I face death every day—yes, just as surely as I boast about you in Christ Jesus our Lord. If I fought wild beasts in Ephesus with no more than human hopes, what have I gained? If the dead are not raised,“Let us eat and drink, for tomorrow we die.”

We get into trouble and drift from our faith when we make it about its effects more than its core agenda. In other words, the Christian faith—also known as the life, death, and resurrection of Jesus Christ—is about the defeat of sin and the end of death. The defeat of sin and the end of death leads to all manner of human flourishing and prospering. It leads to the improvement of human beings beyond measure. It gives birth to endless creative reform and innovation in every sector of society, favoring the lifting up of the poor and the inclusion of the outcast. It gives rise to nothing short of the establishment of the kingdom of God, on earth as it is in heaven.

If the church could be replaced by the Rotary Club (no offense intended to the Rotary Club), the church is simply something other than the church. Paul didn’t face death every day, fight wild beasts, rot in prison cells, and the like for our bake sales.

Our Father in Heaven, hallowed be your name. Your Kingdom come. Your will be done; on Earth as it is in Heaven. We confess that we mistake the effects of the Gospel for the cause of the Gospel. Keep us near the Cross and empty tomb. Help us fix our gaze on the risen and ascended Lord Jesus Christ, who is Lord of Heaven and Earth; the head of the Church, even our God. In Jesus’ name we pray. Amen.

JOIN THE WATCH FOR AWAKENING

Would you join us in prayer for a Great Awakening. We need it now more than ever. Please Learn more and Join Here.