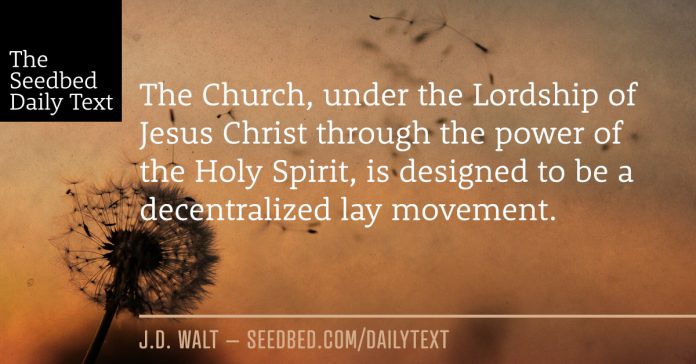 Now those who had been scattered by the persecution that broke out when Stephen was killed traveled as far as Phoenicia, Cyprus and Antioch, spreading the word only among Jews. Some of them, however, men from Cyprus and Cyrene, went to Antioch and began to speak to Greeks also, telling them the good news about the Lord Jesus. The Lord’s hand was with them, and a great number of people believed and turned to the Lord.News of this reached the church in Jerusalem, and they sent Barnabas to Antioch. When he arrived and saw what the grace of God had done, he was glad and encouraged them all to remain true to the Lord with all their hearts. He was a good man, full of the Holy Spirit and faith, and a great number of people were brought to the Lord.

We are eleven chapters into the story of the most significant organization in human history. Here’s my question: Who is in charge? After Stephen’s execution, people went in all directions. The text today tells us they went as far as Phoenicia, Cyprus, Cyrene, and Antioch. They are spreading the word among the Jews as well as the Greeks. Just days ago we witnessed the Lead Apostle preaching the gospel to and baptizing some God-fearing Gentiles from Rome.

The movement seems to grow more decentralized by the day. Then there’s Jerusalem, which seems to be taking on the shape of a home office or headquarters. Back at the home office they seem to be somewhat on edge about what’s happening in the countryside. They police the movement with a critical eye and send out representatives to keep an eye on things as needed. It seems anything but decentralized.

It reminds me of a much chattered about book some years back by Ori Brafman and Rod Beckstrom, The Starfish and the Spider: The Unstoppable Power of Leaderless Organizations. The basic premise: With a spider, there’s the body and the legs, but all the stuff is in the center. Smash the center and kill the spider. With a starfish cut off a leg and the leg can regenerate the whole starfish. Cut it into two pieces and soon you have two starfishes.

So is the Church a spider or a starfish? Resist the temptation to take the easy out and say “both.”

Look at the text for today again and tell me if I’m seeing it wrong. I see all of these things at work. Another interesting feature of decentralized organizations is the way they advance not by the power of a CEO but through the agency of catalysts. (i.e. Barnabas). I guess if Jerusalem wanted to shut down Antioch they should have sent James.

There’s too much to unpack here, so I’ll just offer a few developing thoughts.

Didn’t see that last one coming? I didn’t either.

If you want to see a good, concise summary of the Starfish and the Spider click here.