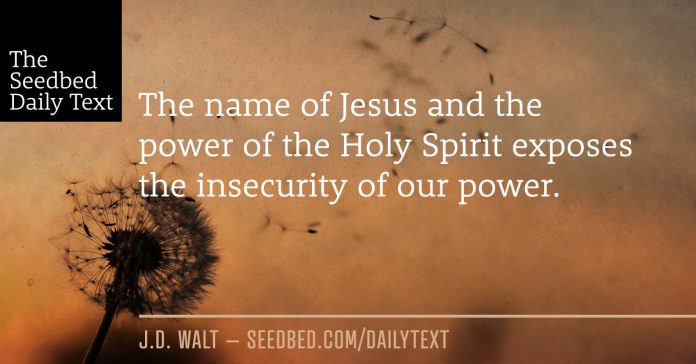 When they saw the courage of Peter and John and realized that they were unschooled, ordinary men, they were astonished and they took note that these men had been with Jesus. But since they could see the man who had been healed standing there with them, there was nothing they could say. So they ordered them to withdraw from the Sanhedrinand then conferred together. “What are we going to do with these men?”they asked. “Everyone living in Jerusalem knows they have performed a notable sign, and we cannot deny it. But to stop this thing from spreading any further among the people, we must warn them to speak no longer to anyone in this name.”Then they called them in again and commanded them not to speak or teach at all in the name of Jesus. But Peter and John replied, “Which is right in God’s eyes: to listen to you, or to him? You be the judges! As for us, we cannot help speaking about what we have seen and heard.”After further threats they let them go. They could not decide how to punish them, because all the people were praising God for what had happened. For the man who was miraculously healed was over forty years old.

Caiaphas and Annas must be stunned. This problem will not go away. Remember, when Jesus raised Lazarus from the dead they called a meeting of the religious authorities. Together they fretted concerning what to do about their Jesus problem. I mean, they couldn’t have people running around raising the dead, could they? They had to quash this—and fast.

They thought they solved the problem with the execution of Jesus, but the whole ordeal was happening again. Why were they so concerned to shut these good works down? What was the problem with this act of kindness? At this point it will be instructive to remember what Caiaphas, the unwitting prophet of the gospel, famously said in response to the raising of Lazarus: “You know nothing at all! You do not realize that it is better for you that one man die for the people than that the whole nation perish.”

There it is! They were concerned that if people followed Jesus, and now by proxy these Apostles, the nation would perish. Herein lies the fatal assumption. They reasoned to themselves that the nation actually needed them more than they (the nation) needed God. Why would the nation perish if they followed Jesus? Maybe the nation would have flourished. They were concerned that their power would perish. Note the question to the Apostles: “By what power or what name did you do this?”

This was all about power and control and a name for themselves. The name of Jesus and the power of the Holy Spirit exposed the insecurity of their power.

These high priests were managing a domesticated religion. They had more fear of Rome than they did of God. They knew Jesus could not be domesticated, so they killed him. The problem with Jesus is he couldn’t be kept dead. They would soon realize this about the apostles.

It’s interesting how this still works today. Let the Holy Spirit do something that’s not in the bulletin—that can’t be controlled—and the religious authorities and “doctrine cops” will clamp down. It’s why churches rarely grow (by Kingdom metrics) beyond the faith of their leaders. That’s why a domesticated gospel is no gospel at all.

On a scale of 1-10 with ten being highest, rate yourself on this statement: “I am a controlling person.” Now ask yourself, why am I that way?