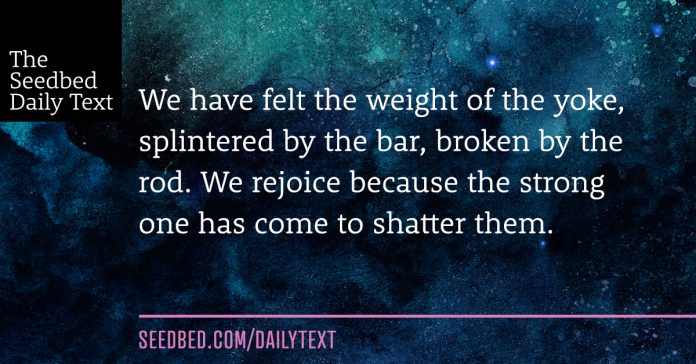 1 Nevertheless, there will be no more gloom for those who were in distress. In the past he humbled the land of Zebulun and the land of Naphtali, but in the future he will honor Galilee of the nations, by the Way of the Sea, beyond the Jordan—
2 The people walking in darkness
have seen a great light;
on those living in the land of deep darkness
a light has dawned.
3 You have enlarged the nation
and increased their joy;
they rejoice before you
as people rejoice at the harvest,
as warriors rejoice
when dividing the plunder.
4 For as in the day of Midian’s defeat,
you have shattered
the yoke that burdens them,
the bar across their shoulders,
the rod of their oppressor.
5 Every warrior’s boot used in battle
and every garment rolled in blood
will be destined for burning,
will be fuel for the fire.
6 For to us a child is born,
to us a son is given,
and the government will be on his shoulders.
And he will be called
Wonderful Counselor, Mighty God,
Everlasting Father, Prince of Peace.
7 Of the greatness of his government and peace
there will be no end.
He will reign on David’s throne
and over his kingdom,
establishing and upholding it
with justice and righteousness
from that time on and forever.
The zeal of the Lord Almighty
will accomplish this.

This is one of the signature passages of Advent. It’s vintage Isaiah, a poetic vision of the hope realized in the arrival of Jesus. We return to it year after year. We read and sing and preach the familiar themes about Galilee and the great light and the government on His shoulders. And Handel’s Messiah starts to play in our heads on loop. It just happened to you right now didn’t it? Sorry, not sorry.

But in the midst of this passage is a reference in verse four to a person we don’t often associate with the season. He gets no shout out in our carols, no mention in our Christmas cards, no bathrobe cameo in our Nativity plays. But Isaiah says that the arrival of our rescue will be like another Gideon moment. He compares the coming of our Savior to what he calls “the day of Midian’s defeat.”

This line refers back to Judges 6 and 7 when Israel was being oppressed by their enemy Midian. Though their sin and rebellion invited this judgment, God in His unrelenting mercy raised up yet another rescue for His people. Once again, He selects an unlikely leader armed with an unexpected instrument to carry out His unconventional strategy.

Gideon reduces his army to a mere 300 men and camps outside of the Midian stronghold. At the Lord’s direction, they enact a ridiculous battle plan, consisting of smashing clay pots, blowing trumpets, and holding up torches. Against all odds, the inspired plan actually works. The mighty army of Midian is thrown into confusion and fear, turning on each other in the chaos and destroying itself before Gideon’s army raises a sword or draws an arrow.

Isaiah tells us that Advent is like that. The arrival of our rescue in Jesus is an echo of what God did for Israel through Gideon. But as in the day of Midian’s defeat, we are shocked when we consider the strategy He employs to break our oppression and overthrow the threat against us. We lean in to hear the battle plan, the tactical genius of our Mighty Warrior. And equipped with the strength of Angel Armies, He goes with this: “For unto us a child is born, to us a son is given.”

We rejoice as Israel did because, like them, we have known the night. We have felt the weight of the yoke, splintered by the bar, broken by the rod. We rejoice because the strong one has come to shatter them. We have been crushed by the warrior’s boot. That is our blood on their garments. So we rejoice when we see them go up in flames.

But our rejoicing is only matched by our wonder. We’ve been watching for our rescue. But we never saw this coming. Wilder than clay pots and torches, we get a virgin singing a lullaby over a manger. A baby cries in the night and hell trembles at the sound. For as in the days of Midian’s defeat . . . it’s a story only He could write.

God of Angel Armies, give me eyes to see You moving in ways I could never expect.