The Meaning of Marriage: Consumer or Covenant? - Seedbed
close
Menu 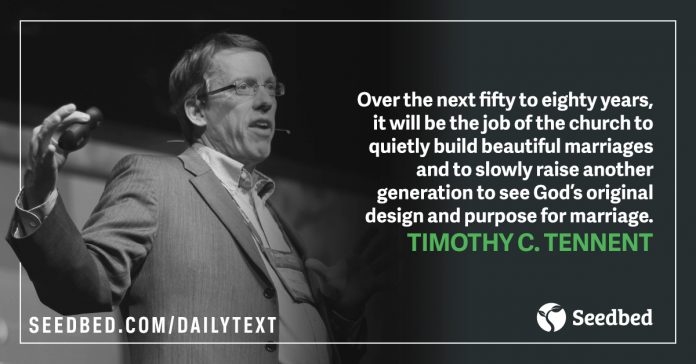 Jesus then left that place and went into the region of Judea and across the Jordan. Again crowds of people came to him, and as was his custom, he taught them.

Some Pharisees came and tested him by asking, “Is it lawful for a man to divorce his wife?”

“What did Moses command you?” he replied.

They said, “Moses permitted a man to write a certificate of divorce and send her away.”

“It was because your hearts were hard that Moses wrote you this law,” Jesus replied. “But at the beginning of creation God ‘made them male and female.’ ‘For this reason a man will leave his father and mother and be united to his wife, and the two will become one flesh.’ So they are no longer two, but one flesh. Therefore, what God has joined together, let no one separate.”

The text begins with the Pharisees seeking to trap Jesus. They ask in verse 2, “Is it lawful for a man to divorce his wife?” Jesus instantly recognizes that they are seeking to trap him, so he takes the initiative by asking in verse 3, “What did Moses command you?” They tell him in verse 4 that Moses permitted a man to write a certificate of divorce and send her away. This is a reference to Deut. 24:1-4. Now, a careful reading of Deut. 24 reveals that Moses did not actually command that men give their wives a certificate of divorce if they are unpleased with them, as the Pharisees claimed.

Jesus recognizes that the issue raised by the Pharisees is but a presenting issue of a deeper malady. This is why we have the reply, (verse 5) “It was because your hearts were hard that Moses wrote you this law, but at the beginning of creation God ‘made them male and female.’ Jesus brings us back to creation. He understands that there are times when you have to go back to the beginning to get things set right. Even though his hearers were not actually interested in God’s teaching on marriage (they were only trying to use this presenting issue to trap him), he nevertheless proceeds to give us the greatest single teaching on marriage in the entire Bible.

Verses 6-9 represent the most cited text in marriage liturgies in every Christian tradition: “At the beginning of creation God made them male and female. For this reason, a man will leave his mother and father and be united to his wife and the two will become “one flesh,” so they are no longer two, but one. Therefore, what God has joined together, let man not separate.”

We live in a time when the teaching of Jesus on marriage is mostly incomprehensible to the wider culture. Today, the very nature of marriage itself has been lost; the whole notion of design has dropped out of the cultural conversation and, indeed, the whole institution is being questioned or turned into a commodity. So, today, we face endless presenting issues around divorce, remarriage, sexual activity outside of marriage—both fornication and adultery—pornography addictions, homosexual behavior, same sex marriages, homosexual ordination, commodification of marriage, child molestation, living together outside of marriage, the secret world of lust, gender re-assignment, and etc.

The focus in recent years on homosexual behavior, or same sex marriage in particular, sometimes obscures the larger Christian perspective that this is just one point along an entire spectrum of sexual brokenness which has descended upon our culture and, sadly, upon the church as well. It is important to recognize that all of these examples are, in various ways, signs of sexual brokenness or, perhaps a better way to put it, are signs of all the ways we have distorted God’s design for marriage. Indeed, it is precisely because when we understand God’s design for marriage that we can develop important pastoral responses to people who have experienced broken marriages. It also allows us to discover extravagant ways to show our love to homosexuals, or divorced people, or people who have escaped abusive situations, etc.

We do not accept—we cannot accept—the prevailing presupposition of a utilitarian, consumer view of marriage. In contrast, the Scriptures, rooted in creation, give us a covenantal view of marriage. That is a huge gulf which cannot be glossed over in the midst of an array of presenting issues. This is why Jesus goes back to creation. Today, we stay connected to people only as long as they are meeting our particular needs at an acceptable cost to us. When we cease to make a profit—that is, when the relationship appears to require more love and affirmation from us than we are getting back—then we “cut our losses” and drop the relationship. This is known as the “commodification” of marriage, a process by which social relationships are reduced to measurable economic and emotional exchange units. With this framework, marriage is fully privatized, taking it out of the public sphere completely. Its purpose is redefined as individual gratification, economic stability, and happiness, rather than any “broader good.” There is no place for things like assuring the survival of humanity, reflecting God’s nature, producing character, raising children, reflecting the Triune God, become co-creators with Him, etc. Slowly but surely, this newer understanding of the meaning of marriage has displaced the older one in Western culture.

Over the next fifty to eighty years, it will be the job of the church to quietly build beautiful marriages and to slowly raise another generation to see God’s original design and purpose for marriage. Even in the midst of massive sexual brokenness, Jesus calls us back to the creational, covenantal and Eucharistic mystery of marriage.

1. What are some practical ways your church can support Christian marriages?
2. If you are married, what are some ways you can exhibit deeper self-donation and sacrificial love in your own marriage?