The Conversations that Matter Most - Seedbed
close
Menu 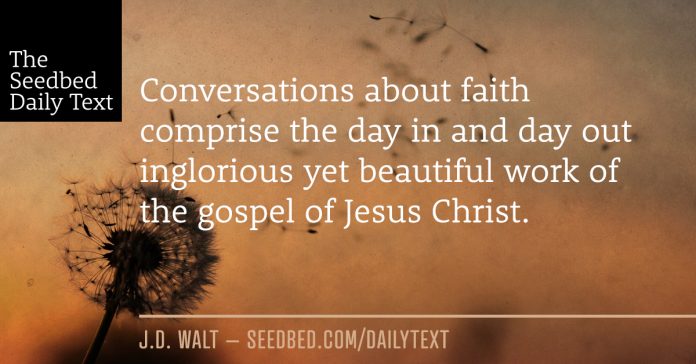 Paul entered the synagogue and spoke boldly there for three months, arguing persuasively about the kingdom of God. But some of them became obstinate; they refused to believe and publicly maligned the Way. So Paul left them. He took the disciples with him and had discussions daily in the lecture hall of Tyrannus. This went on for two years, so that all the Jews and Greeks who lived in the province of Asia heard the word of the Lord.

Preaching and teaching are critically important in the work of the gospel, but it’s easy to slip into thinking this is primarily how salvation happens. You know the story. Some awesome preacher preaches a powerful sermon, makes an invitation to “come forward,” and people respond and are “saved.” Isn’t that what happened at Pentecost with Peter and some three thousand people responded to the invitation?

Most of the time it looks more like what’s going on in today’s text. Paul speaking in the same place to the same people for three months, arguing persuasively and boldly. It takes two to have an argument. It requires conversation. It requires caring enough for people who don’t agree with you and who probably don’t like you to stay in the argument for the sake of possibly persuading some of them to believe the gospel. Paul was having conversations about faith with people who did not believe.

He stayed with it until it got nasty and rather than leaving town, he opted for a change of venue. He went from the synagogue to the lecture hall of Tyrannus. Get this. He went there daily and engaged in “discussions,” which is another word for “conversations” for another two years.

Conversations about faith comprise the day in and day out inglorious yet beautiful work of the gospel of Jesus Christ. I don’t know about you, but my problem is I’m not in enough conversations these days with people who don’t believe.

The interesting thing about the Wesleyan movement in 18th century England is the way people came to salvation. It didn’t happen so much in response to Wesley’s preaching. It happened in the conversations people had together afterwards in the class meetings.

Don’t hear me to diminish the role of gospel preaching. I’m just saying that most often there’s a lot more to it than that. It could be as close as your next conversation.

What about your conversations about faith with people who have yet to believe? How is that going? How might it get going? What keeps you from it?