The Core Calling of Every Christian - Seedbed
close
Menu 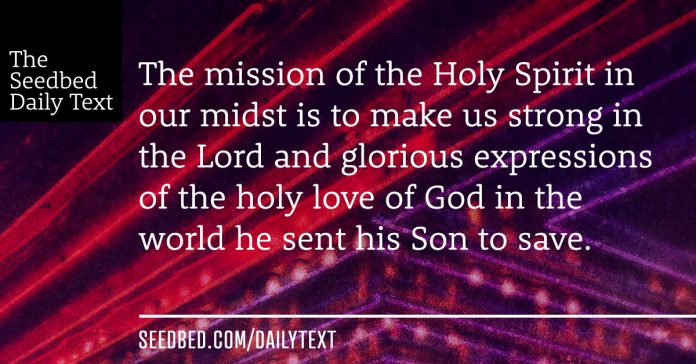 I always thank my God for you because of his grace given you in Christ Jesus. For in him you have been enriched in every way—with all kinds of speech and with all knowledge— God thus confirming our testimony about Christ among you.Therefore you do not lack any spiritual gift as you eagerly wait for our Lord Jesus Christ to be revealed. He will also keep you firm to the end, so that you will be blameless on the day of our Lord Jesus Christ. God is faithful, who has called you into fellowship with his Son, Jesus Christ our Lord.

A few things we need to understand about our context will help shed light on the letter as we begin to move through it.

About Corinth. Corinth was a first century boom town. It was a major seaport and a hub of the Mediterranean. In some sense all roads led to or through Corinth. Corinth was an ancient precursor to “Sex, Drugs, and Rock and Roll.” Transplant Las Vegas in San Diego and you get a feel for first century Corinth. This bustling colony of Rome had a population of around 100,000—150,000 tops.

About the church in Corinth. Best we can tell, there were no more than about 150 Christians in Corinth. Paul planted the congregation in around 50 A.D. Nobody had “grown up” in the church. These were first generation believers who had mostly come out of pagan religions and cults. Given the size of the church around the world today at appx. 2 billion people, we need to keep in mind the infinitesimally small size of these early churches. It’s extraordinary to consider the ultimate impact they had on the world.

About the letters. You will notice later in the document, Paul references an earlier letter he had written to the church in Corinth. That letter has never been found. The letter we call 1 Corinthians was likely written in about 54 A.D. It looks like Paul was writing from Ephesus while working with the young church there.

In 1 Corinthians Paul is responding to the Corinthians response to Paul’s earlier (missing) letter. Then there’s 2 Corinthians, which also seems to reference another missing letter. In short, it looks like 1 Corinthians is actually Paul’s second letter and 2 Corinthians is actually the fourth one. Bottom line: we aren’t reading a book here. We are reading one side of a conversation conducted through letters. And as I noted yesterday, from the side of the conversation we get to study, the little church in Corinth was a mess. In the characterization of New Testament scholar and friend, Michael Halcomb, we are looking at a first century version of a Jerry Springer show.

In today’s text, just nine verses in, we quickly come to the end of the “nice” and salutary portion of the letter. Paul is employing the faithful “sandwich” technique. You know what I’m talking about—start with praise—cut to the hard stuff and end on a good note. In these early verses Paul is looking for things to be thankful for as relates to these people. He points out their overabundance of knowledge, gifted speech and spiritual gifts. He reminds them again of the mission of the Holy Spirit in their midst—to make them strong in the Lord and glorious expressions of the holy love of God in the world he sent his Son to save.

Remember their calling from yesterday? It bears revisiting.

To the church of God in Corinth, to those sanctified in Christ Jesus and called to be his holy people, together with all those everywhere who call on the name of our Lord Jesus Christ—their Lord and ours (1 Corinthians 1:2)

Let’s stretch this verse out like a banner over the whole letter. We readily want to interpret our “calling” as something God wants us to do for him. That is actually the fruit of our calling. Our calling is not to “do something.” It’s to become “someone.” It is to become someone who through the power of their life, words, deeds and relationships reminds other people of Jesus.

Let’s be very clear—this is why Paul is writing the letter.

Paul has one purpose—for the small but growing group of people in Corinth known as the church to fulfill their calling to become sanctified in Christ Jesus and become God’s holy people. This, and only this, will win the ballgame. No amount of team reorganization or new methods or better mission statements will ever do it. E.M. Bounds said it best, “The Church is looking for better methods. God is looking for better men [people].”

It will take the Word of God in concert with the Spirit of God to transform people of God into the image of God so they can participate in the will of God to redeem the world of God. If I had to reduce the New Testament to one sentence, that would be it.

Now, did you catch the last part of that text above?

together with all those everywhere who call on the name of our Lord Jesus Christ—their Lord and ours . . .

This letter is also to us. We are included in the group of people known as, “all those everywhere who call on the name of our Lord Jesus Christ.”

Father God, thank you for this little band of first century Christians we know as the Church in Corinth. It is amazing to contemplate how you took 150 people in a city of 150,000 and unleashed the Gospel of Jesus. I confess. I have focused so much on what you want me to do for you. I want to humble myself and ask, who do you want me to become. And I want to ask you to help me become it by the power of your Word and Spirit. In Jesus name, Amen.

The Christian faith and church can be parsed into a hundred different possible priorities. What is the priority for you? For your church? What would it mean for you respond to your calling to become holy? What would it not mean?

P.S. Wilderness: Global Pandemic Edition are starting to fly off the shelves (yes even before they exist). Secure your copy of this commemorative limited release edition today.

© Seedbed 2021
The Core Calling of Every Christian
MORE STORIES