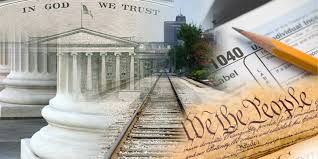 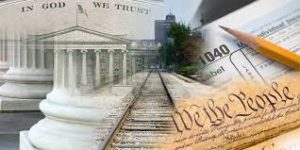 Since I believe in Jesus and the kingdom of God, I believe:

The Lord God is a God of righteousness, justice, holiness, truth, and love—all qualities that have political implications. The Bible is essential in revealing these. God also reveals himself additionally through the “Book of Nature.”

Human beings are created in the image of God—male and female equally—and given a stewardship responsibility that includes politics, economics, and creation care.

The Bible neither endorses nor condemns capitalism, socialism, or any other political-economic system of ideology. A range of options is possible so long as people’s rights are protected and the general wellbeing advanced. The ideals of both capitalism and socialism embody Christian values, but due to human sinfulness and selfishness, in practice these are often betrayed and people exploited.

People should take personal responsibility for themselves as far as they are able. The Bible teaches each person is responsible for him- or herself, yet we are also all responsible for each other. This is an aspect of being created in the image of the Triune God and of course has political implications.

The church should assist and minister to the poor in all ways it can, consistent with the gospel. The church is God’s primary political instrument in the world in the sense of creating godly community, families, and cultures. But God has also instituted government to maintain and promote the public good and restrain evil.

A key role of the church is to build a community of moral character, training children and adults to live righteous, just, and morally pure lives. By its example and social-cultural involvement, the church should uphold the sanctity of marriage and of all human life. This is in fact a primary political role of the church.

Government (not just the church) is morally responsible to care for the poor. Maintaining justice for the poor and oppressed is a key biblical criterion for all government everywhere, regardless of culture or tradition. This is a clear teaching of the Old Testament and is supported also in the New Testament.

In a sinful world, effective government always involves compromise—not holding out for ideal solutions, but working toward the best possible solutions under the circumstances.
As citizens, we are responsible for and should work toward the general welfare—that is, the benefit of everyone, not just ourselves.

Government is responsible to protect people from those who would harm them directly or indirectly.

Government is God’s gift to us, not our enemy. But it can become our enemy if it acts unjustly or oppresses the poor.

A key role of government is to prevent or at least restrain (thus necessarily regulate) the exploitation of the public, especially the poor, by people and institutions with power over others. These institutions include business corporations, entertainment and sports media, religious institutions, news media, paramilitary groups, and labor unions if and when they gain or regain significant political power.

Just and effective governments also have built-in mechanisms (usually in the form of an independent judiciary) for restraining government itself from becoming exploitive of its citizens and of aliens and refugees.

Just and effective governments also maintain and protect freedom of speech and assembly and of the press. This provides an important check on government and other social institutions.

Property is not sacred except in the sense that it belongs to God. All our “property rights” are actually stewardship responsibilities—stewardship before God in behalf of others locally, regionally, nationally, and ultimately globally.

Since land and the whole earth (with skies, seas, and planets) belong to God but are entrusted in stewardship to humanity, humans have a responsibility to properly care for the environment so that both the human and the nonhuman creation can thrive mutually and symbiotically for the benefit of all and the glory of God. This basic fact transcends and impinges upon all political ideology and practice. However it should influence our political choices.

Christians believe their security and safety are based in God’s providential care, not in government or weapons.

Basic healthcare for all benefits everyone, so should be affordably provided to everyone. It is one way a humane society cares for each other, not each person just looking out for him- or herself.

The kingdom of God is coming in fullness and it is the church’s mission to embody that just and righteous reign of God in its community life and in its public witness in the world, including in politics, economics, the arts, science, and other areas of culture.

No government or political-social movement will bring in the kingdom of God. Neither will any revival or great awakening. But God can use these and other dynamics proximately toward the ultimate realization of the kingdom of God when Jesus returns to earth.

Obviously this ad hoc aphoristic summary is not a full political philosophy. However it does give a sense of “where I’m coming from” politically. Several of these themes I have elaborated in various of my books, articles, and blogs.