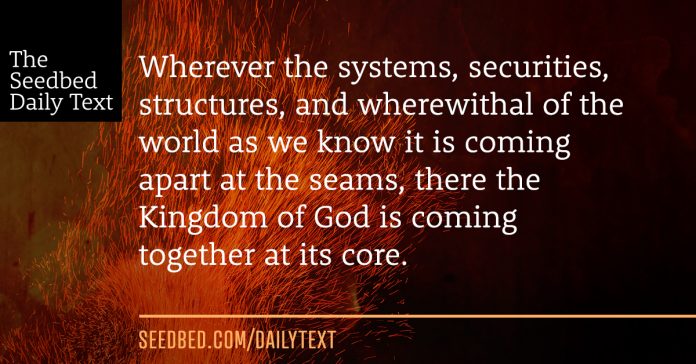 3 As Jesus was sitting on the Mount of Olives opposite the temple, Peter, James, John and Andrew asked him privately, 4 “Tell us, when will these things happen? And what will be the sign that they are all about to be fulfilled?”

5 Jesus said to them: “Watch out that no one deceives you. 6 Many will come in my name, claiming, ‘I am he,’ and will deceive many. 7 When you hear of wars and rumors of wars, do not be alarmed. Such things must happen, but the end is still to come. 8 Nation will rise against nation, and kingdom against kingdom. There will be earthquakes in various places, and famines. These are the beginning of birth pains.

9 “You must be on your guard. You will be handed over to the local councils and flogged in the synagogues. On account of me you will stand before governors and kings as witnesses to them. 10 And the gospel must first be preached to all nations. 11 Whenever you are arrested and brought to trial, do not worry beforehand about what to say. Just say whatever is given you at the time, for it is not you speaking, but the Holy Spirit.

It was one of those conversations for the ages. Jesus and four alarmed disciples sat atop the ancient Mount of Olives gazing across the Kidron Valley at the majesty of the magnificent Temple. In a stunned sort of “did he really just say that” silence, they tried to wrap their minds around the unthinkable: that the Temple, this enduring monument to their favored national identity and the focal point of their faith would be decimated in ruins. They had moved from if to when.

“Tell us, when will these things happen? And what will be the sign that they are all about to be fulfilled?”

All their hopes lived in Jesus Messiah, the One who would reinstate the sovereignty of God in the land, restore the Kingdom, expel the infidels of Rome and usher in an era of unprecedented peace and prosperity. They probably saw Jesus’ raucous rumble in the Temple as the pre-game warm-up; a flexing of messianic muscle. They had no category for a post-Jesus, post-Temple Israel. The whole thing seemed to be coming apart at the seams, unraveling before their very eyes.

It’s not a fitting analogy, but for example’s sake, imagine the United States of America not only ravaged by terrorists, but ruled by them. Imagine the complete destruction of the Capitol building and the White House and the great memorials. It is so unthinkable it’s impossible to imagine. And there isn’t even a word to describe the prospect of imagining what would happen beyond that.

Jesus is talking to his disciples not only about the unthinkable day when it would all come down, but worse, the unimaginable day after that. Now, note what he says to them. In my understanding and way of thinking about it, he told them something akin to the following:

“You are about to find yourselves at the tip of the spear of the movement of my Gospel, which will not stop until it reaches every nation on the planet. The Holy Spirit is going to carry you to places you never dreamed of going. At times you will find  yourselves on the wrong side of a prison door. At other times you will find yourselves standing before the thrones of Kings. DO NOT BE AFRAID. You answer only to the King of Kings. The world will seem to literally fall apart all around you, but DO NOT BE AFRAID. You will be following the trail of the One who will in fact be making all things new. The forces of sin and death and evil will be unrelenting in their pursuit of you, but DO NOT BE AFRAID. You will be standing on the shoulders of a Messiah who has defeated the rule of sin and destroyed the reign of death. The days ahead will be painstakingly hard but they will be whole heartedly glorious.

Here’s the good news: I’ve got this, and you’ve got me and everywhere you go I will establish my Kingdom and build my Church and the gates of hell don’t stand a chance. No weapon formed against this Gospel will prosper. All who rise up against it will fall down. Be warned though: nothing is going to happen like you expected it to happen, and you will thank me later. For it will only be in the wake of the death of your expectations that the future of my making can break through. Let go of your expectations so that a deeper expectancy might be birthed. Let go of your fears and take hold of me. Let go of your control and take up my Cross. All of your training and experience has brought you to this place where you hold nothing but possess everything. You are on the eve of a future you could never in a million years look ahead and predict, and it will lead to looking back on a past you would never in a million years change. Be on your guard. Don’t be alarmed. And never be afraid.

Just know this: Wherever the systems, securities, structures, and wherewithal of the world as we know it is coming apart at the seams—right there—in that place—you can bet the Kingdom of God is coming together at its core.

Spirit of the Living God, fall afresh on me. Lord Jesus, everywhere we look we see the ruins of what once was. It disturbs us and we are so prone to want to build it back and even better. All the while, you are building something completely different. Convert us to your project and save us from trying to convert you to ours. Melt me. Mold me. Fill me. Use me. For the glory of your name, Jesus. Amen.

So what do you think? Are you holding on to a limiting set of expectations that could be holding you back from the expectancy of the transcendent possibilities of God? What would it mean to begin letting those expectations go? Think of the downsides of releasing them. Now consider the upsides?