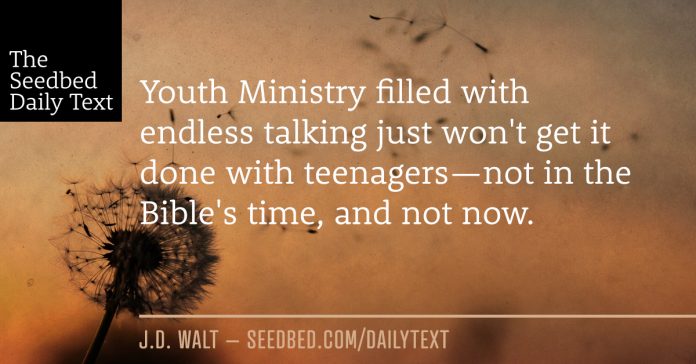 On the first day of the week we came together to break bread. Paul spoke to the people and, because he intended to leave the next day, kept on talking until midnight. There were many lamps in the upstairs room where we were meeting. Seated in a window was a young man named Eutychus, who was sinking into a deep sleep as Paul talked on and on. When he was sound asleep, he fell to the ground from the third story and was picked up dead. Paul went down, threw himself on the young man and put his arms around him. “Don’t be alarmed,” he said. “He’s alive!” Then he went upstairs again and broke bread and ate. After talking until daylight, he left. The people took the young man home alive and were greatly comforted.

It has been called the first recorded instance of youth ministry in the early church.

I love the color commentary Luke gives us here.

“Paul spoke to the people. . . [and he] kept on talking until midnight. And he talked on and on.”

And the poor kid, Eutychus, stayed with him as long as possible. It was way past bed time. He fell asleep—deep sleep—drooling, sawing logs asleep.

Actually, we might consider this the first warrant for focused youth ministry. Paul’s method of endlessly talking just won’t get it done with teenagers—not then and not now. This was not the kind of “lock-in” that Eutychus had in mind!

He was way past “nodding off.” He was way asleep. And yes, the kid actually falls out of the window. He fell three stories down to his tragic and untimely death.

I know it’s a stretch here, but I have to ask. Is this what our churches are doing to our students? Are we putting them to sleep and leaving them to spiral downward into the culture of death all around us?

To be fair, Paul redeemed himself, miraculously raising the boy to life again.

After a quick bite, Paul was back at it, talking on and on “until daylight.”

How is it with youth ministry in your church? Is your church attuned to Eutychus? Why or why not? How can you help?