Why Are You So Defensive? - Seedbed
close
Menu 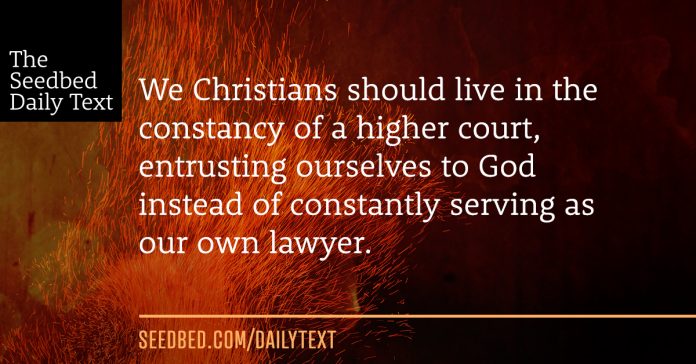 Very early in the morning, the chief priests, with the elders, the teachers of the law and the whole Sanhedrin, made their plans. So they bound Jesus, led him away and handed him over to Pilate.

2 “Are you the king of the Jews?” asked Pilate.

3 The chief priests accused him of many things. 4 So again Pilate asked him, “Aren’t you going to answer? See how many things they are accusing you of.”

5 But Jesus still made no reply, and Pilate was amazed.

Given a chance, people who are accused of something will defend themselves and typically refocus the blame on someone else. Human beings are instinctively defensive creatures. One might say, it’s in our genes. Remember this from the early days?

And he said, “Who told you that you were naked? Have you eaten from the tree that I commanded you not to eat from?”The man said, “The woman you put here with me—she gave me some fruit from the tree, and I ate it.”Then the Lord God said to the woman, “What is this you have done?”The woman said, “The serpent deceived me, and I ate.” Genesis 3:11-13.

From the youngest children to the oldest adults, we hate being accused of something we did not do or for which we are not responsible. It violates our rights and sense of justice.

The chief priests accused him of many things. So again Pilate asked him, “Aren’t you going to answer? See how many things they are accusing you of.”

But Jesus still made no reply, and Pilate was amazed.

Jesus submitted to the jurisdiction of Pilate and his court but he chose not to dignify it with a defense. Jesus stood in Pilate’s chambers but for him another court was in session. As Peter tells us in his letter:

When they hurled their insults at him, he did not retaliate; when he suffered, he made no threats. Instead, he entrusted himself to him who judges justly. 1 Peter 2:23

There it is. “Instead, he entrusted himself to him who judges justly.”

Many believe Peter was Mark’s primary source in the writing of the Gospel account. This particular Gospel would find major traction in Rome with the Christians there who suffered under immense persecution. This account of Jesus’ passion served as a literal handbook for the way they would deal with the same kinds of situations. They would not defend themselves but instead would entrust themselves to him who judges justly.

Though my every day life seems a thousand miles away from being put on trial for following Jesus, I do find a hundred daily scenarios in which I feel the need to defend myself. Whether it be big issues at work or trivial disputes around the house, I find that I need to be right, and this need leads me to defend my position. This need to be right goes by another name: self-righteousness, and the need to defend myself is also known as “self-vindication.” Why do we do this? I think it’s because our own sense of security is primarily rooted in ourselves and our ability to protect ourselves. We mostly entrust ourselves to ourselves, and that’s our biggest problem.

I’ve got a challenge for us, just for today. Could you and I make it through an entire day without defending ourselves or becoming defensive in the face of some offense? While this is a far cry from being on trial for our faith, the same deep impulses are at work. If we can’t entrust ourselves to him who judges justly in the smallest things how on earth will we do it in the big things.

I believe this could be one of the most critical areas of maturity for our discipleship. I know I struggle with it. I know you do too. Don’t get defensive on me. ;0)

Spirit of the Living God, fall afresh on me. Lord Jesus, I struggle with the need to defend and justify myself even when I’m likely wrong. You  who were innocent did not defend or justify yourself but you entrusted yourself to our Father. Teach me this way of entrustment. Melt me. Mold me. Fill me. Use me. For the glory of your name, Jesus. Amen.

Do you find yourself as a defensive person or one who needs to justify yourself a lot? Do you need to be right in a conflict? What might it look like to entrust yourself to the protection of God more than needing to vindicate yourself?

Forward this email on to friends. They can SUBSCRIBE HERE.

© Seedbed 2021
Why Are You So Defensive?
MORE STORIES