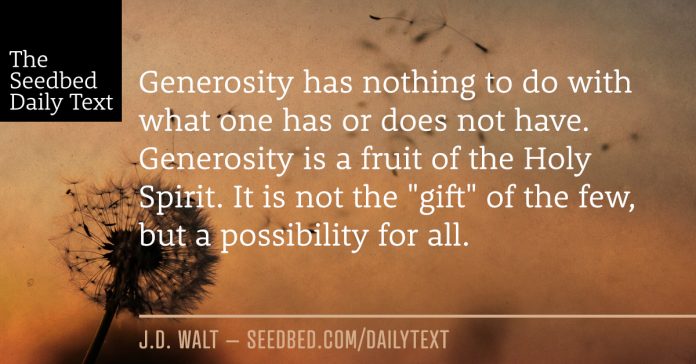 And the congregation of those who believed were of one heart and soul; and not one of them claimed that anything belonging to him was his own, but all things were common property to them. And with great power the apostles were giving testimony to the resurrection of the Lord Jesus, and abundant grace was upon them all. For there was not a needy person among them, for all who were owners of land or houses would sell them and bring the proceeds of the sales and lay them at the apostles’ feet, and they would be distributed to each as any had need.Now Joseph, a Levite of Cyprian birth, who was also called Barnabas by the apostles (which translated means Son of Encouragement), and who owned a tract of land, sold it and brought the money and laid it at the apostles’ feet.

I remember making a particular friend in seminary with whom I had very little in common. He grew up very poor in the region of our country known as Appalachia. By a miracle of grace and his diligence in school, he received a full scholarship from a college in Kentucky. The same would happen again later when he came to seminary. I’ve never known a person who valued his education more than him.

Upon arriving at seminary, he was assigned a roommate from the former Soviet Union (and a former KGB agent at that!). Incompatible doesn’t begin to describe the situation. My friend soon learned of his roommate’s wife and young daughter back in Russia.

Unbeknownst to anyone, he began a quiet fund raising campaign to cover the expenses to bring the wife and daughter to live in Kentucky. He called on new friends and old, rich and poor, to get involved. And it happened. (Did I mention that my friend had no idea how he was going to cover all of his own costs?)

I will never forget a particular late night conversation in the dorm. Several of us argued into the night about the role of government and the role of the church in providing aid for the poor. Predictably, political ideologies rang much louder than theological wisdom. Some contended it was the church’s role to care for the poor and her failure which had led to the modern welfare state. They argued for a return to practices of the first century Christians, which looked a lot more like a plank from the platform of the Democratic party than it did the Church. Then there was the “Rush Limbaugh Fan Club” contingency who lobbed the “biblical” principles of free market capitalism into the mix like grenades. Their approach felt more like the Grand Old Party than the Church.

Then my friend, who to this point in the conversation listened patiently, spoke up. With a somewhat inappropriate degree of volume, he began to recite a text from Deuteronomy, 15:4. His version went something like,

“But as for you, there should be no poor among you, for in the land the Lord your God is giving you, you will be richly blessed.”

He challenged us to memorize this text. I’ve never forgotten it. I can’t help but think of it when I come to passages like today’s above. Take a second and re-read it now. Real Christians don’t take their cues from MSNBC or Fox News when it comes to the poor. We must look to Deuteronomy 15 and Acts 4 and a thousand other places in the Word of God. When I look at a text like today, I do not see an institutional approach to human need. I see a community of individual people and families practicing radical generosity* together. Neither tithing nor taxation will ever get it done; only generosity.

Generosity has nothing to do with what one has or does not have. Generosity is a fruit of the Holy Spirit. It is not the “gift” of the few, but a possibility for all. Few things are more encouraging than to encounter a truly generous person. I want to be that person. Don’t you?

When it comes to the problem of poverty and the challenges of the poor is your thinking more shaped by the Word of God or by political ideologies? Why?

*I’d like to introduce you to my dear friend, Gary Hoag, aka “The Generosity Monk” who who authored a fantastic resource for Seedbed on generosity. He also writes a short reflection on generosity every day. You will be inspired to share it with others.

P.S. Our friend from Russia is now the president of a seminary in the heart of the capital city spreading the gospel to the far reaches of the continent.