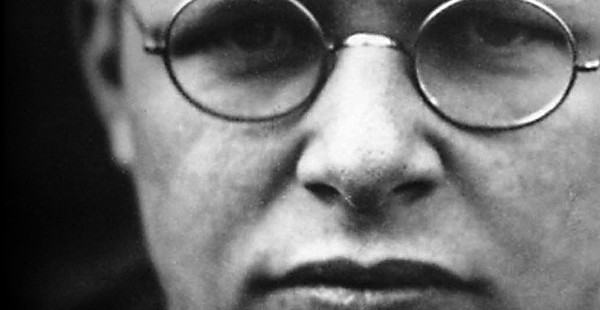 A fascinating glimpse of what was happening to American theology at the turn of the 20th century with the emergence of theological liberalism comes from the German pastor and martyr Dietrich Bonhoeffer, who came to America in September 1930 to study at Union Theological Seminary in New York City.

Admittedly, Bonhoeffer was not your ordinary theological student. He had an earned doctorate from Berlin University and had studied under Adolf von Harnack, a renowned liberal theologian in Germany. While Bonhoeffer did not agree with many of Harnack’s conclusions, he respected his serious scholarship. As he experienced things firsthand at Union, he found the theological situation worse than he had anticipated:

There is no theology here. . . . They talk a blue streak without the slightest substantive foundation and with no evidence of any criteria. The students—on the average twenty-five to thirty years old—are completely clueless with respect to what dogmatics is really about. They are unfamiliar with even the most basic questions. They become intoxicated with liberal and humanistic phrases, laugh at the fundamentalists, and yet basically are not even up to their level.

What Bonhoeffer discovered was that he had come to Union at a time when the “bloody battle royale between the liberals and fundamentalists was in full swing in 1930.” Just eight years earlier, Harry Emerson Fosdick, America’s most famous liberal preacher, preached his controversial sermon “Shall the Fundamentalists Win?” In that sermon, he had expressed his “serious doubts about most of the historic assertions of the Christian faith, including the virgin birth, the resurrection, the divinity of Christ, the atonement, miracles, and the Bible as the Word of God.”

Bonhoeffer soon learned that Union Seminary was “on the side of Fosdick, Rockefeller, and Luce.” Rockefeller’s millions had helped build the stunning and massive Riverside Church (adjacent to Union Seminary), modeled on Chartres Cathedral, and was to influence students in the liberal theological tradition for years to come. Henry Luce put Fosdick’s face on the cover of his Time magazine, with a glowing cover story about him and the church.

While Bonhoeffer acknowledged that the students fell into several basic groups, he noted that “without doubt the most vigorous . . . have turned their back on all genuine theology and study many economic and political problems. Here, they feel, is the renewal of the Gospel for our time.” And while the students showed impressive personal sacrifice in providing food and lodging for some thirty unemployed people over the winter, still he said, “It must not, however, be left unmentioned that the theological education of this group is virtually nil, and the self-assurance which lightly makes mock of any specifically theological question is unwarranted and naïve.”

Bonhoeffer’s observations about the American churches, especially in New York City, were also particularly critical. “The sermon has been reduced to parenthetical church remarks about newspaper events. As long as I’ve been here, I have heard only one sermon in which you could hear something like a genuine proclamation.” He went on to ask, “One big question continually attracting my attention in view of these facts is whether one here really can still speak about Christianity?”

In a significant summary of his observations of the American churches he had witnessed, with the exception of several African- American churches that impressed him deeply, Bonhoeffer wrote, “In New York they preach about virtually everything, only one thing is not addressed, or is addressed so rarely that I have as yet been unable to hear it, namely, the gospel of Jesus Christ, the cross, sin and forgiveness, death and life.” Just what has taken the place of the Christian message? According to Bonhoeffer: “An ethical and social idealism borne by a faith in progress that—who knows how—claims the right to call itself ‘Christian.’ And in the place of the church as the congregation of believers in Christ there stands the church as a social corporation.” 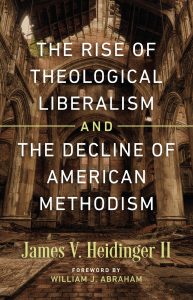 Are you interested in learning more about theological liberalism and its impact on the American church? Jim Heidinger wrote a book titled, The Rise of Theological Liberalism and the Decline of American Methodism. Get your copy from our store now. The quotations and account of Bonhoeffer’s visit to American depends on Eric Metaxas’s
Bonhoeffer: Pastor, Martyr, Prophet, Spy (Nashville: Thomas Nelson, 2010), chap. 7, 99ff.