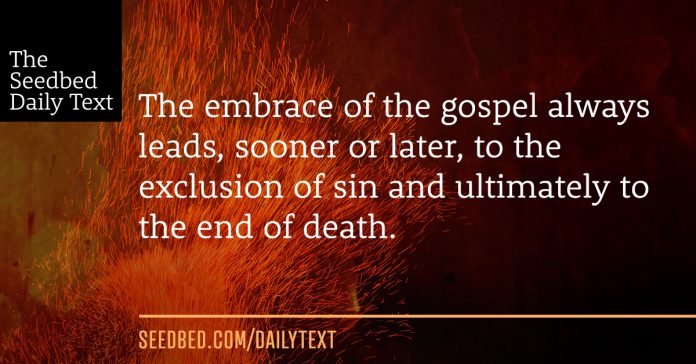 31 Then Jesus left the vicinity of Tyre and went through Sidon, down to the Sea of Galilee and into the region of the Decapolis. 32 There some people brought to him a man who was deaf and could hardly talk, and they begged Jesus to place his hand on him.

33 After he took him aside, away from the crowd, Jesus put his fingers into the man’s ears. Then he spit and touched the man’s tongue. 34 He looked up to heaven and with a deep sigh said to him, “Ephphatha!” (which means “Be opened!”). 35 At this, the man’s ears were opened, his tongue was loosened and he began to speak plainly.

36 Jesus commanded them not to tell anyone. But the more he did so, the more they kept talking about it. 37 People were overwhelmed with amazement. “He has done everything well,” they said. “He even makes the deaf hear and the mute speak.”

112. Let’s start with getting our geographical bearings. For  those who haven’t paid much attention to biblical geography, which is most people, let’s begin today by getting our geographical coordinates. Galilee is in the north part of the country. Jerusalem was in the south. Jesus spent most of his time in and around Galilee. Yesterday, we went with Jesus and his disciples on their quest for rest to Tyre. Tyre was north of Galilee and and in the south portion of what today is Lebanon.

In today’s text, Jesus left Tyre and headed for the Sea of Galilee only when he reached the Sea he took a left and went into the Decapolis. (Had he taken a right turn he would have landed back in Galilee. The Decapolis consisted of ten cities located primarily on the eastern side of the Jordan River located in what today is the nation of Jordan. While Tyre was Phoenician in its culture, the Decapolis was decisively Greco-Roman. In the midst of a largely Semitic region, the Decapolis was a stronghold for Greek and Roman culture.

113. Why does this matter? The demands on Jesus and his disciples were extraordinary. At the same time, opposition from the religious establishment was on the rise. Jesus literally “left the building” so to speak. He headed for the border, out of the land of the Jews and into Gentile country, where it turned out he was also fairly well known. Before we get half way through the Gospel according to Mark, the gospel has already gone out of bounds. O.K., it went out of bounds a long time ago with the sorts of people Jesus healed and fellowshipped with within the “promised” land.

114. All the boundaries that matter so much to people, then and now, Jesus seemed to ignore. Jesus moved without hesitation across boundaries of status, race, gender, ritual laws, unclean-ness, Sabbath prohibitions and more. Next he ignored national borders and cultural boundaries. It’s like they weren’t there.

115. Two things are always simultaneously true of Jesus, then and now. He never hesitates to call sin “sin,” and he never hesitates to embrace people. The only two things Jesus cannot abide is calling sin “not sin,” and failing to embrace people. Whether it be the fierce legalism of the religious elite or the audacious license of the cultural zeitgeist, Jesus will always call sin “sin.” It’s like calling cancer cancer. In the same way a human body cannot tolerate cancer, a human being cannot tolerate sin. Both mean death. When sin is called “not sin,” it is akin to looking at a malignant tumor and calling it benign.

Somewhere along the way the extravagant embrace of the gospel in the name of Jesus became twisted into the radical doctrines of political correctness in the name of “inclusiveness.” In this ideological framework, the only sin is to be intolerant of sin. It breeds a culture of death. This is how tolerance in the name of love actually kills love.

The embrace of the gospel always leads, sooner or later, to the exclusion of sin and ultimately to the end of death. It’s because the gospel is about salvation, which means healing which means the eradication of the cancer that is sin and death. This is how Love wins.

116. So why all of this conversation about sin coming out of a text that doesn’t even mention sin. Because this text, among other things, is about boundaries and this is where all the confusion and chaos creeps in. Jesus does not eradicate boundaries in the interest of inclusiveness. He crosses boundaries in the name of Love.

Spirit of the Living God, fall afresh on me. Lord Jesus, forgive us for our tolerance of sin. Awaken us to the cancerous power of sin and its treacherous strategies of deception. Save us from the tragedy of tolerating sin. Train us in the embrace of the kind of love that is willing to suffer for the deliverance of sin’s captives. We need extreme grace in our times. Melt me. Mold me. Fill me. Use me. For the glory of your name, Jesus. Amen.

Do  you see how the tolerance of sin is the antithesis of love and the pinnacle of deception? What is the strategy of love to combat this deception? How might we be deceived in our approach to combatting this radical tolerance and uber-inclusiveness of our time?