On the Difference Between Pity and Compassion - Seedbed
close
Menu 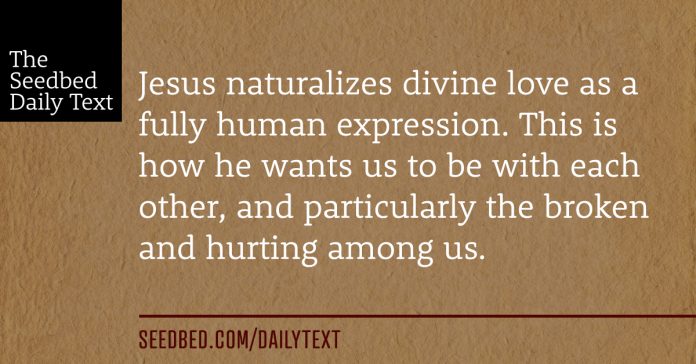 Soon afterward, Jesus went to a town called Nain, and his disciples and a large crowd went along with him. As he approached the town gate, a dead person was being carried out—the only son of his mother, and she was a widow. And a large crowd from the town was with her. When the Lord saw her, his heart went out to her and he said, “Don’t cry.”Then he went up and touched the bier they were carrying him on, and the bearers stood still. He said, “Young man, I say to you, get up!” The dead man sat up and began to talk, and Jesus gave him back to his mother.They were all filled with awe and praised God. “A great prophet has appeared among us,” they said. “God has come to help his people.” This news about Jesus spread throughout Judea and the surrounding country.

Jesus went to a town called Nain. Jesus was not just wandering around the countryside. Every step he made held significance beyond our ability to even comprehend. Everything he did had profound theological significance and yet it all was insanely practical. He turned water into wine, a mystery whose theological meaning we are still discerning. All the while he was solving a major problem at a wedding celebration– the wine ran out. Watch as this same dynamic unfolds in today’s text.

So why Nain? Nain was a small town about six miles south of Nazareth in Galilee. We are about to see the clashing of movements. Jesus is followed by his disciples and a large crowd of people as they near the city gate. Just as they arrive, a funeral procession is leaving the city with a large crowd following a widow with her deceased and only son. The movement of Life is meeting up with the movement of death. Imagine the contrast between the joyfully astonished throng following Jesus and the mournfully broken crowd following the widow and the dead son. We are in for a cosmic confrontation.

When the Lord saw her, his heart went out to her and he said, “Don’t cry.”

Far from easy sympathy, Jesus had compassion on this woman. I’ve heard charity described as giving someone the shirt you no longer want and compassion as giving someone the shirt off of your back. I love this translation. “His heart went out to her.” When I say, in response to some tragedy, “My heart goes out to them,” what I mean is I feel sorry for them. That’s about it. With Jesus, it’s more like his heart actually leaves his body and enters into the body of another person. This is precisely what God has done in Jesus and continues to do through Jesus in the strength of the Holy Spirit. This is what it means for one person to “be with” another person; to enter into their reality and experience so deeply that their presence cannot be distinguished from your own. In the midst of two large crowds converging at the narrow place of a city gate, Jesus “saw her.” God seeks out the brokenhearted. We know “his heart went out to her” not because he said something nice but because he made a bee line straight to her. He was not at this funeral. He didn’t know these people. He was doing something else entirely, but he went straight to her.

So many times I have been in a hospital to see a particular person. As I approach their room I walk past and see so many other people, most of whom are all alone. Something in me says just knock on their door and ask if you can help them, pray for them, get them some water. Too often, though, I reason to myself that I don’t know them, that they have “people”, that it would be an unwanted intrusion to do this and I just go on about my business. In retrospect, I think the Holy Spirit was bursting at the seams to release the heart of God in those hospital rooms but was coming up short on Jesus types to actually do it. Lesson learned.

It’s so rare for someone to “be with” us like this. It requires the kind of attention of which only Divine Love is capable and this is the amazing thing about Jesus. He naturalizes Divine Love as a fully human expression. This is how he wants us to “be with” each other and particularly the broken and hurting among us. This is who the Holy Spirit is and what the Holy Spirit does: He naturalizes and normalizes Divine Love in and through our ordinary lives in all our dealings with one another. It’s all at once miraculous and ordinary. And Daily Text readers, this is not just the pastor’s job. This is all of our shared privilege together. I would love to tell you a story about Brother Buddy Ratliff who does this as well as I’ve ever seen it done, and I’d love to tell you a story about a community of Africans who taught me what this kind of “being with others” looks like in the wake of tragic loss.

I need to close for the day. Jesus tells her not to cry and then he shows us all why. He walks over to the dead son and talks to him. Yes, he speaks to a corpse:

And lo and behold the MIRACLE happened!

The dead man sat up and began to talk,

The life movement won out over the death movement. Sooner or later, it always does. You want to know the real miracle here? It’s in this last bit:

and Jesus gave him back to his mother.

You see, this widow had not only lost her son, she had essentially lost her life. She was completely disconnected from the community with no source of status or sustenance. She had truly joined the ranks of “the poor.” This act of Jesus giving the boy back to his mother was a profound Gospel move, restoring not only her son but her life as well. Profoundly theological. Insanely practical.

The people were awestruck. I love that they said this:

“God has come to help his people.”

That’s what we want to be said in the wake of our being with others in the midst of hardship, struggle, loss and pain: “God has come to help his people.”

Tomorrow, we’ve been invited to join Jesus for a meal in the home of a Pharisee. It will be interesting. Prepare yourself.

P.S. Some of you may have felt a little deja vu in today’s text. That wasn’t a glitch in the matrix. Jesus doesn’t miss a trick. To see what I’m talking about check out this Elijah story.

Father God, thank you for showing us what it looks like when the movement of Life overcomes the movement of Death. It’s who you are. Lord, I want to be in that number; part of that movement. Open my eyes and my heart and my faith to this awakening movement today. IN Jesus name, Amen.

© Seedbed 2021
On the Difference Between Pity and Compassion
MORE STORIES